Chipman Letter Given To Court In Judicial Review Bid 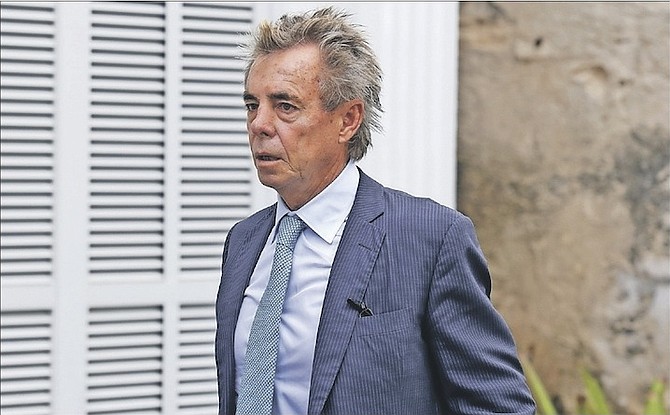 A JUDGE has been supplied with a copy of a letter that would support the request from members of the Official Opposition for leave to begin judicial review proceedings of a parliamentary order on constituency boundaries for the upcoming general election.

Justice Ian Winder is set to rule today on an ex-parte application brought by Montagu MP Richard Lightbourn and Fort Charlotte MP Dr Andre Rollins and their attorney Michael Scott, who was given time to file two documents, an affidavit indicating the number of people so far registered to vote in the next general election and a letter House Speaker Dr Kendal Major read and tabled in Parliament last Wednesday that was written by St Anne’s MP Hubert Chipman.

The latter document was supplied to the court yesterday accompanied by a letter from Mr Scott who stressed that the court ought not to accept the authority case (Russel v the Attorney General for the State of St Vincent and the Grenadines et al) given by Crown lawyer Loren Klein during the hearing of the ex-parte application last Thursday.

“I would wish to point out to his lordship that the reference to this case is completely misconceived as it concerns the failure by the relevant government to appoint a commission at all which is not the point here” Mr Scott stressed in his letter to Justice Winder yesterday.

“The point here is that a commission was appointed and it failed to report on time, thus, the principle is not the same. Ultimately, it is a point of statutory interpretation and the well known canon of construction, which virtually requires no authority, is that if at all possible courts should try and give meaning and effect to all words in a statutory provision.”

“So in this case, the only meaning and effect to the time provision could be that if not complex with the report is invalid, that it is not a statutory report at all. Moreover, the time requirement cannot be directory because its breach carries no penalty or sanction.”

“There is an alternative answer to the dilemma which is perfectly rational, namely, that the boundaries report in existence (2012) continues in full force and effect. Further, this is the Constitution the supreme law of the Commonwealth to which Parliament and all derivative organs are subordinate in law,” Mr Scott concluded.

Mr Chipman alleged in the letter that the boundaries report he signed as the Official Opposition’s representative on the Constituencies Commission differed from the one Prime Minister Perry Christie tabled in the House of Assembly.

Mr Chipman’s letter, dated February 13, expressed the St Anne’s MP’s “extreme displeasure at the complete and utter variance between the contents of the documents shown to me and the document tabled in Parliament.”

“The document I signed is not the same document tabled in parliament on Wednesday, February 8, 2017. In particular as mentioned during our telephone conversation of Friday, February 10, (2017), I had no prior knowledge of the changes relating to Montagu as announced by the prime minister when the draft report was tabled in the House of Assembly on February 8, 2017.”

The MP said there is “no objective criteria so far as we can see to support the recalibration of the boundaries for those constituencies described in schedule 1 or first schedule to the draft order.”

Mr Chipman’s letter also stressed that “there can be no justification for an increase in the number of seats, particularly where voter registration has been alarmingly abysmal in 2016 and in 2017.”

Mr Chipman further stressed that the draft report “does not comply with the requirements of Article 70 (1) of the Constitution and is probably void, with the result that the position to be applied is that which prevailed in the 2012 elections so that there will be 38 constituencies with the boundary configurations referable thereto as were extant in the 2012 elections.”

Mr Chipman’s letter is relevant to the ex-parte application because otherwise the applicants must contend with the fact that the Constituencies Commission report was unanimously approved by the commission, despite the claims of bias and gerrymandering that the Official Opposition has since made.

The applicants argue that leave for a judicial review should be granted because the draft order on constituency boundaries was tabled too late, represents gross gerrymandering and is wrong to feature an additional seat even though the pace of voter registration is slower than that of 2012.

However, Mr Klein argued at the ex-parte hearing that leave for the judicial review should not be granted because the applicants failed to establish an arguable case based on the categories of wrongs that typically determine such a course of action: illegality, irrationality or procedural impropriety.

The applicants’ complaints of gerrymandering “may be political points,” Mr Klein said, but they don’t “rise to the level of showing there has been an illegality, irrationality, procedural impropriety or some other breach of the Constitution.”