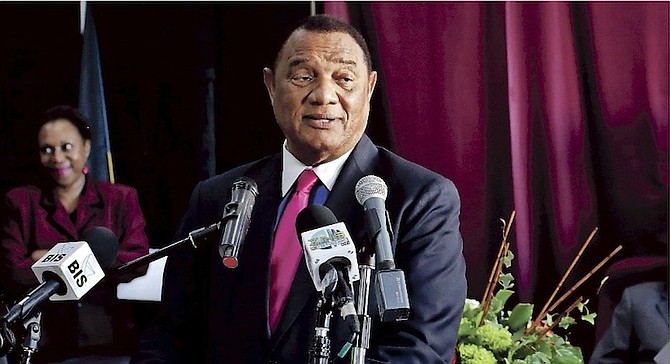 PRIME Minister Perry Christie on Friday condemned St Anne’s MP Hubert Chipman’s claim that the boundaries report he signed off on differed from the one tabled in the House of Assembly last week.

On February 13, Mr Chipman sent a letter to House Speaker Dr Kendal Major in which alleged that the report he signed as the Official Opposition’s representative on the Constituencies Commission was different from the one Mr Christie presented to Parliament.

Mr Chipman is currently travelling to Guyana for CARICOM meetings alongside Foreign Affairs Minister Fred Mitchell and a government delegation.

Mr Christie called the St Anne’s MP’s allegation “distressing”, and revealed that he has instructed Mr Mitchell to tell Mr Chipman that his action was “a terrible thing (to do)”.

“The report was not touched,” the prime minister said. “The report that he signed came to Parliament as is. I made a communication indicating that whenever a debate is finished, as prime minister under the constitutional powers that I have, I was going to recommend one change that was agreed to when we did the resolution, and that was a name change from Montagu to Freetown. So it is a distressing sort of intervention that he made because a judge of the Supreme Court who always says, ‘Listen, I’m not here to play the politics, I’m here to guarantee fairness’ (was on the commission). And that judge signed off on it. Everyone who knows the Speaker (of the House) knows the Speaker is a man who prides himself on being fair and (he signed off on it), so I think (what Mr Chipman did) was unfortunate.”

Mr Christie said he assumes Mr Chipman did what he did because he was “forced” or “coerced” into signing the document “for the purpose of laying the foundation for legal action”.

Supreme Court Justice Ian Winder granted permission on Thursday to members of the Opposition who are challenging the constitutionality of the boundaries report in Court to submit Mr Chipman’s letter to the court.

Without that letter, the applicants for judicial review would have to contend with the fact that all five members of the commission – including Mr Chipman – signed the report that was later tabled in the House.

“There was absolutely no change from what Brave Davis, Jerome Fitzgerald, the Speaker, the Justice of the Supreme Court and Hubert Chipman signed,” Mr Christie said. “Their report came in as is. It went to the Governor General as is and it came to Parliament to me as is. I reviewed it and for reasons that I stated, ancestral reasons, since Blair and all of those were no longer in that large grouping in Montagu, since Ingraham had taken St Thomas More and submerged it into Montagu, just looking at it and the substantial number of residents in Kemp Road and right around there, a good and appropriate take would be to name it Freetown.”

Applicants for leave to commence judicial review proceedings into the Order on the boundaries also allege that it represents gross gerrymandering.

To this Mr Christie said: “They claim that but this is all part of the politics of the election season. You would’ve heard the PLP say the same things in the past; it’s something that opposition parties say and do and when Hubert Ingraham did the boundaries in the last election, we won. When I did the boundaries in 2007, the FNM won. As someone rightly said, lines, those lines don’t vote. People vote. People wherever they are will determine who forms the next government of the Bahamas; the rest of it is just posturing. Now they are before the court. I’m told the court reserves judgement for Tuesday. We’ll see. I was convinced om the basis of advice I received that at the end of the day we will be justified in continuing on the lines of 39 constituencies and that’s what we’re doing now. In fact, if it ever goes back to 38, I’m in a much stronger position, with all those wonderful parts of Englerston that Ingraham gave me and St Cecilia.”

And "for ancestral reasons" we must forget Crooked Christie's silly Freetown. What we so desperately need instead is a Free Bahamas, i.e. a Bahamas free of the misery, pain and suffering caused to most of us by none other than Crooked Christie himself!

A buffoon and a clown.

Comrades! Watchoo Talkin' Bout - Where's the politics in this new boundary shift?
The Rt. Hon PM has freed Montagu's long enslaved Bay Street Boys Upper Middle Class (UBP's) - simply by his busing them over into Free Town -just in time for the 2017 General. “Lord now lettest thou thy servant Upper Middle Class (UBP's) depart in peace, according to Christie's word, for the PM's eyes have seen Thy salvation."
- LUKE 2:29 -
Montagu be's no more!

The Boundaries Commission likely failed to meet the required deadline for the submission of its report. Therefore the constituencies and their boundaries as they were in the last general election will remain unchanged for the impending general election. Christie shot himself in the foot by trying to delay the work of the Commission until the very last moment, mainly because of the unusually low voter registration earlier on. Also, any fair minded individual with an iota of common sense can readily see from the proposed boundary lines for the suggested new Freetown constituency that Christie and the PLP members of the Commssion were engaged in, and entirely motivated by, gerrymandering in an effort to gain what they believe would be an easily guaranteed "free" seat for the PLP in the next general election. Christie's remarks only serve to confess as much. In any event, New Providence already has more constituencies than it really needs, so Christie and the PLP members of the Commssion are hardpressed to come up with rational reasons to justify the significant initial and ongoing costs that would arise from the creation of a new constituency. These are all matters that the Commission members (including Hubert Chipman) and the Speaker of the House have wrongfully turned a deaf ear to.

Comrades! Funny when it comes to all matters that the House Speaker and the Governor General have so casually turned over the offical opposition to Long Island's MP "Rehease" (which just happens to include the MP Hubert Chipman) - all have turned a deaf ear when it comes to how did this all come about?
I mean, even Tennyson Wells, who never shy's away from sharing what he knows lots about - has never tackled the "how in the hell did "Reheasa" become The Queen's Official Opposition leader - and why Minnis remains extra silent, not wanting to press the puzzling issue?
Oh sure, just let her drive around in what was once Minnis's government car and park in his reserved parking spot.......I guess i sure beats parking in a spot reserved for disabled motorists.

The criminal PLP are so scared that D'Aguilar is going to win Montagu and be a thorn in their side in the HOA that they have blatantly moved the boundary to try and reduce his chances. Freetown? Give me a break. Can this bunch of criminals sink any lower? Probably!

Comrade Honestman's, I guess you've never bothered to examine the 2012 General's razor slim vote spread between the Red and Yellow Shirts Montagu candidates - skipping over that the upcoming 2017 General is shaping up to be such a messy and chaotic affair that no experienced pundit would dare to risk their reputation on to predict the results.

So the PLP remove two polling areas from Montague that they know are predominantly FNM in order to boost their chances. It is called gerrymandering.

Comrade Honestman's, it's called keeping in the gerrymandering spirit of reconciliation of deeply embedding Montagu's UBP's, into Free Town.
Don't you worry okay - it ain't like the PM is relocating their houses and furniture's - just blending them in to live more closer to some common folks.

Notice the purple in the picture (above)...Will you be turning your purple (voters card) into red, green or golld?

The only Freetown that I know of, is in Eleuthera, derived from the Puritan Eleutheran Adventurers when they fled Bermuda in 1648, looking for religious freedom. They named Eleuthera for the Greek word for freedom and also had a settlement called Freetown (which is still there) across the bay from Rock Sound.

So what did they do? Send Mr. Chipman out of town (With Fred Mitchell)and debate the bill in his absence. then critize him from being absent from the HOA? What criminals!!!