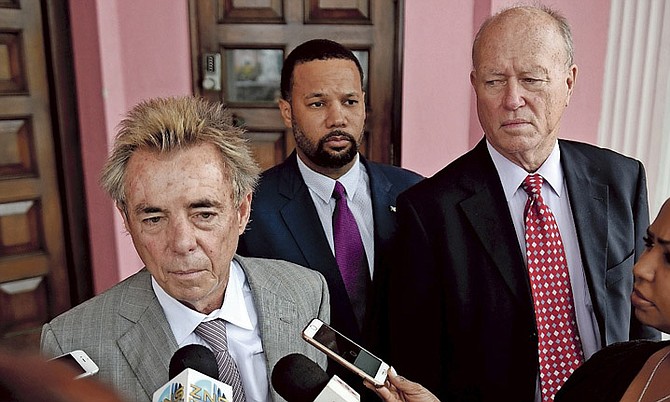 Michael Scott speaking to the media - with Dr Andre Rollins and Richard Lightbourn watching on.

A GOVERNMENT lawyer argued in the Supreme Court yesterday that the court should reject the request from members of the Official Opposition for leave to begin judicial review proceedings of a parliamentary order on constituency boundaries because the judicial review attempt is doomed to fail even if leave is granted.

Justice Ian Winder adjourned the hearing until Tuesday, February 21, which is when he will deliver his ruling.

He granted Michael Scott, the attorney representing Montagu MP Richard Lightbourn and Fort Charlotte MP Dr Andre Rollins, permission to file two documents, an affidavit indicating the number of people so far registered to vote in the next general election and a letter House Speaker Dr Kendal Major read and tabled in Parliament Wednesday that was written by St Anne’s MP Hubert Chipman.

Mr Scott indicated he would consider filing an injunction next week against the Governor General, to whom the draft order will be passed for proclamation and gazetting before taking legal effect.

Mr Chipman alleged in the letter that the boundaries report he signed as the Official Opposition’s representative on the Constituencies Commission differed from the one Prime Minister Perry Christie tabled in the House last week.

The letter is relevant because otherwise the applicants must contend with the fact that the Constituencies Commission report was unanimously approved by the commission, despite the claims of bias and gerrymandering that the Official Opposition has since made.

The applicants argue that leave for a judicial review should be granted because the draft order on constituency boundaries was tabled too late, represents gross gerrymandering and is wrong to feature an additional seat even though the pace of voter registration is slower than that of 2012.

However, Loren Klein, the attorney representing the government, argued that leave for the judicial review should not be granted because the applicants failed to establish an arguable case based on the categories of wrongs that typically determine such a course of action: illegality, irrationality or procedural impropriety.

The applicants’ complaints of gerrymandering “may be political points,” Mr Klein said, but they don’t “rise to the level of showing there has been an illegality, irrationality, procedural impropriety or some other breach of the Constitution.”

For his part, Mr Scott argued that the last week’s draft order, which was passed in Parliament on Wednesday night, is illegal.

As part of his written skeleton argument submitted to the court, Mr Klein said: “With respect, it is plain that the complaints of ‘gerrymandering’ and voter apathy - as a reason militating against the creation of an additional constituency - raise none of the traditional grounds on which a party might invoke the supervisory jurisdiction of the court.”

He added: “Further, it is trite that the function of a court in judicial review proceedings … is not to usurp the decision-making authority of the body, or substitute its own decision for that of the body entrusted with the decision.”

Mr Klein argued that “the only semblance of a complaint” that addressed the traditional grounds for invoking the supervisory jurisdiction of the courts through judicial review is the applicants’ claim that the Constituencies Commission report was not tabled in Parliament within a five-year period.

Even if the report has been tabled late, he said: “That does not necessary give rise to a sustainable ground for judicial review. It certainly does not follow that the report is void, or that it should be quashed.

“The purpose of Article 70(1) of the Constitution is clearly to allow a review of the boundaries prior to any general election. It would frustrate the purpose of that Article and be contrary to purposive and liberal interpretation of the Constitution to adopt a construction of that article the effect of which would be to keep alive a Constituencies Commission report which has not been updated in five years.”

The government's lawyers are right. Let's get to this election and get this all over with.

The two members are to be commended for standing up for all of us, for doing their part to protect our future. Government must know that there are some of us out there who will stand up.

It is sad when you see Peter Turnquest wine about it and then give in....spineless. I would not want him to represent our country in any international negotiations. He will wine and complain and then let them walk all over us. Useless....utterly useless.

The PLP has cheated and lied its way through the last five years. They will cheat and lie some more in the belief they can keep their grip on power. Fortunately, their wicked ways are "doomed to fail". No boundary change skullduggery will prevent the Bahamian people from delivering its judgment on these parasites at the upcoming general election. The clock is ticking.

The sad part is that in all probability, the PLP will win again due to the plethora of stupid Bahamians. However there is a silver lining to this dark cloud. Maybe we have to hit rock bottom to either smarten up or get rid of the stupid people.

I een got too much faith in the lawyer. Looks like someone peed on his head and then he stuck his finger in an electric socket.

I have the same sentiments. If the PLP somehow wins again, it will only serve to carry us to complete rock bottom. The alternatives are not that much better either.

All I heard was "finger in electric socket" Rotfl.. Oh and "peed on his head" LOL

Winder is a plp operative. Why not have a ruling made by a less politically biased judge?