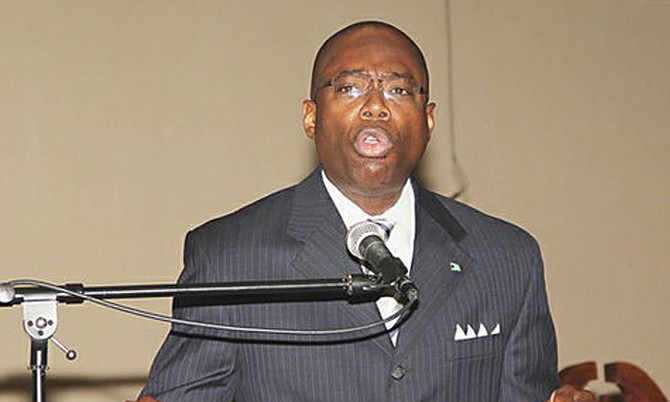 EFFORTS by Official Opposition members yesterday to have debate on the draft order for constituency boundaries postponed while their application for a judicial review of the order is before the court were rebuffed by House Speaker Dr Kendal Major, who allowed the debate to begin as scheduled.

The men hoped their application, which will be heard before the Supreme Court Justice Ian Winder this morning, would prompt Dr Major to postpone the debate.

When he attempted to argue his position, Dr Rollins was met with fierce opposition from Dr Major and members of the governing party. He tried numerous times to rise on a point of order, but Dr Major denied him his requests.

“Take your seat,” Dr Major often shouted. “You are not recognised.” At one point, after Dr Rollins stood on a point of order for well over a minute even as Dr Major told him to sit, the Speaker threatened to name him.

“There’s a ruling on the floor by the chair,” Dr Major said. “You’re going to find yourself named from this House.”

Before he finally yielded and encouraged Mr Lightbourn to make the case in his stead, Dr Rollins shouted emphatically at Dr Major.

For his part, Dr Minnis, leader of the Free National Movement (FNM), said during the session that allegations St Anne’s MP Hubert Chipman made about the alleged variance between the draft order tabled by Prime Minister Perry Christie last week and the Constituencies Commission report he signed were so serious that the debate of the should be postponed until a resolution is made with respect to his claims.

Dr Major, however, rejected all rationales for postponing the debate.

“You have chosen to use the courts to challenge these proceedings today and you must be advised that any matter cannot be injuncted by the court,” he said. “This body will carry on its work and you are within your rights to use the courts as you so well desire. However, at this time, to have two bites at the same issue is improper and violates the precedent. The fact that you have gone to court and now expect to come in this place and speak to this issue with the intent to prevent debate will not succeed.

“However, all members will be given an opportunity to express themselves on what will be done. Despite the circumstances, each member (of the Constituencies Commission signed the draft order). “There were no objections. The draft order was forwarded to the Governor General. The Prime Minister in his capacity made modifications with explanations. The notice of the debate was given a week ago to this House. No court can injunct Parliament. Should we hold off the general election because of what a member perceives to be an action of the court?”

Later, during his contribution to the debate, Dr Rollins tabled a communication in which he asked Dr Major to be consistent in his views about the relationship between Parliament and the judiciary.

Sorry to say ........... but this Speaker is a biased, weak, vindictive, condescending PLP puppet

the plp very own uncle tom. one spineless wutless negro.

No surprise there. The Speaker has demonstrated time and again that he is no more than a PLP puppet.

And his understudy Dion Smith is an even bigger ass kissing toad.

and now this schmuck thinks he's bigger then the LAW.... Wowee PLP you got everyone drinkin der koolaid and pissin it out on everyone = good job....