‘I Made Mistakes - I’M Only Human’ 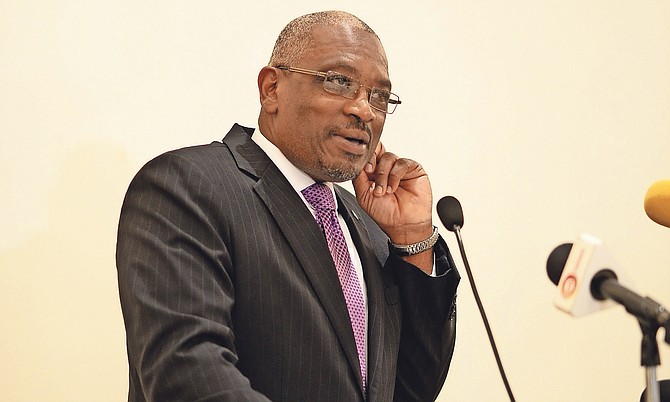 WHILE admitting he sometimes gets “it wrong” and does not communicate as best he could, Prime Minister Dr Hubert Minnis said there have been many “tough” days since the Free National Movement was elected to govern the country earlier this year.

And two weeks after he lambasted members of the media at the Bahamas Press Club awards banquet for sometimes “blurring” the lines between reporting and commentary, Dr Minnis said constructive criticism is necessary to help those govern “become better leaders”.

“God knows, God truly knows I have made some mistakes,” Dr Minnis said as he addressed parishioners at a local church yesterday morning. “God knows that sometimes I get it wrong.”

The prime minister also seemed to acknowledge he at times becomes defensive in the face of criticism adding, “this is only human nature”.

These remarks follow hot on the heels of last week’s events in which the prime minister dismissed as “fake news” a document about the transfer of portfolio responsibilities of Environment Minister Romauld Ferreira which was later found to be legitimate and gazetted on August 22.

It also comes after weeks of backlash over the Commercial Enterprises Bill and criticism the prime minister received over announcing Members of Parliament would receive raises in the next budget cycle without explaining how the government planned to make possible the increase.

On Sunday, Dr Minnis appeared humble as he spoke on the occasion of the fifth pastoral anniversary of Bishop-elect James Newry and Elder Queenie at Calvary Deliverance Church on East Street South.

He said: “My brothers and sisters, for just over six months it has been an extraordinary privilege to serve as prime minister of our wonderful and blessed country. I am motivated every day by a commitment to social justice and accountability.

“I am motivated by the needs of the poorest and most vulnerable in our land. Any privilege that does not issue forth in helping the least among us (is) a privilege that is wasted.

“The greatest privilege of serving as head of government is the opportunity to improve the lives of my fellow Bahamians. It is a special privilege to work daily to provide our children and young people with opportunities to dream and realise their dreams. My passion is to give back to our country what this country has given me, and since May I have had a new vantage point that has allowed me to see more in depth the challenges and problems as well as the opportunities and possibilities of our country.”

Dr Minnis also said: “There are many tough days. There are sometimes sleepless nights, but the great reward of helping others outshines the sometimes-difficult days and nights.

“God knows, God truly knows, I have made some mistakes. God knows that sometimes I get it wrong. Sometimes I don’t explain or say things as well as I could. But let me say this, my season is not finished yet. My vision and mission is one of reform and transformation. I am committed to making ours a fair and more just society, less burdened by violent crime and less burdened by the corruption by public officials.

“My pledge is working hard to improve our economy and boost economic growth and jobs so that more Bahamians can live a better life.

“We are a democracy. Criticism is necessary and helps those who govern to become better leaders. I thank those in our land who offer sincere and constructive criticism. I have learned from many of these criticisms – mind you some of the criticisms is unwarranted or uninformed.

“Sometimes one can become defensive because of criticisms. This is only human nature and it happens to all of us. All of us whether church, business or political leaders have to be able to discern the difference between criticism that is merited and criticism that is not. With God’s help and the help of others, I will continue to grow and to learn. My season is not finished yet.”

However, Press Secretary Anthony Newbold came to Dr Minnis’ defence during his press briefing last week and said the gazetted document is real but contains errors. He said it prescribes to Dr Minnis responsibilities Cabinet never transferred to him, a fact officials only recently learned.

The document reports that responsibility for seven matters had been transferred from the portfolio of Mr Ferreira to the Office of the Prime Minister.

Because Mr Ferreira is a persistent target of rumours from the Free National Movement’s opponents on social media, the document gave rise to unsubstantiated theories about why he was having his portfolio reduced.

Mr Newbold said Dr Minnis had not seen the document when he dismissed it as “fake news” in a short interview with reporters on November 25, but had merely assumed the document claimed there was “wholesale transfer of responsibilities from Mr Ferreira to him with the intent to demote (Mr Ferreira).”

Mr Newbold said the only function transferred to Dr Minnis is responsibility for the Bahamas Environmental Science and Technology (BEST) Commission. The other matters - the Plant Protection Act, wild animal and bird protection, natural history specimens, relations with national and international organisations on matters relating to the environment, international convention, treaties, protocols and agreements relating to the environment and reef and blue holes - were not meant to be transferred to the prime minister as the gazetted document says, according to Mr Newbold.

This is highly refreshing -- humility of a servant leader.

Comrade Banker, when your press secretary "Acee," refers those meeting with the PM, as having an 'Audience' with the PM - it sure as hell sounds more 'Papal' in tone than humility of a servant leader...even if the PM's confession was done standing behind Sunday morning pulpit.
{Amen, cause why even try make up the PM's press secretary, and Sunday morning pulpit's confession of bad conscience}.

Give the Doc a break Comrade! Try live in HIS shoes for a few weeks!

Can anyone understand what Tal says sometimes? The words are English, but when you read her sentences, they either don’t make any sense or is very difficult to understand.

Comrade Honest Truth, regardless, has your good English ever brought a PM to confess?
This reigning PM's guilt has been confessed to direct from the Sunday morning pulpit that there's one Comrade's bad English that sometimes causes him 'countless' of sleepless nights. Some people does see dead people in they sleep... this PM, sees the Comrade.

He likes it that way!

The problem is, Minnis more often than not gets it wrong by shooting from his hip without having availed himself of invaluable input from others who are wiser and more knowledgeable about the possible repercussions of the particular issue or public policy matter under consideration. We, the people, and our country, can ill-afford a PM who, because of his triple-whammy of God, Saviour and Moses-like complexes, is not inclined to accept that their are many others much smarter and wiser than he is on any given subject matter.

Comrade Well_mudda_take_sic, the PM can do his red colleagues a face saving favour - if he appointed himself to replace the soon outgoing Governor General Marguerite. The PM's job needs man's who wears bigger trousers.

It's good that Minnis can admit this but learn to shut the hell up and have all info before you speak. This goes to his entire administration. Be forthcoming with information to the press and the Bahamian people and be united.

The former administration was all over the place with two cabinet ministers telling the press conflicting stories while the PM had a completely different story. This new lot seems to not like to talk to the press at all giving way to speculation as we saw last week. Not speaking to the press is stupid and moronic and will ultimately be the downfall of this administration. If I were a PLP spin doctor now would be the best time to practice the craft.

Tell Romi and Shannel to communicate and stop hiding.

Tell Romi and Shannel to communicate and stop hiding

I have a niggling feeling that Romi is batsh*t crazy.

Comrades! If the prime minister isn't prepared to nix away with the granting Expat's business licenses likes they were cheap cans sardines. It will take much more than a Sunday morning pulpit confession to fight off the brewing battle that will put struggling native entrepreneurs against this red shirts cabinet and influx hundreds Expat entrepreneurs and their import thousands work permit workers. We have no space at Kelly Island unless the red shirts plan to evict the native Fish Fry Operators - to makes space for the Expat's Fry Huts and their work permit Expat cooks and servers.

Blunders aside. the PM is not a truthful persons. He is like Trump lie for no reason. There is no space to list the lies. He lied to win the election and he continues to lie.

We would all find compassion in his admittance speech if we didn't listen Dr. Minnis' own colleague Ellsworth Johnson - prior to the elections condeming the mistakes a previous administration made.

"yes everyone makes mistakes, thats why there is a hell". - Ellsworth Johnson (little hubert's Minister of Legal Affairs)

As the head of this political team similar to a surgical team it is understandable the CEO would be in the front to say the good or bad news. However as CEO of the largest team ever more must be demanded from the other team members. 35 members.

Comrades! Had my morning specially home-baked Brownie got me rationalising - exactly what in hell happen during the 2017 General Election that saw the return the red shirts party back their glory days governing. I'm thinking it was the citizens, who either didn't bother to show up to vote, or outright refused to register to vote - that determined that neither Minnis, or Christie, were fit be prime minister. The smart and determined not blow their constitutional right "NOT" to register or vote.