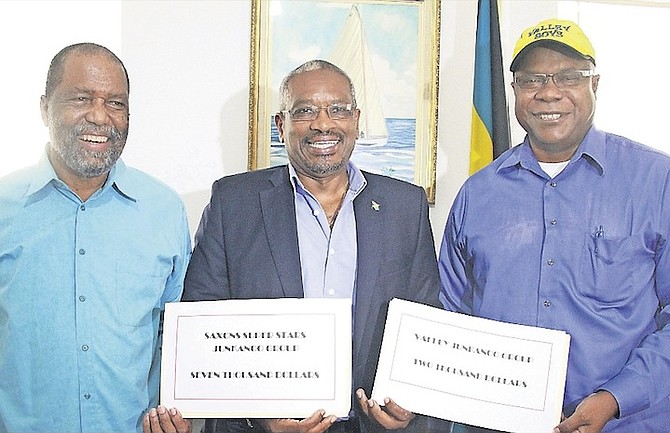 FREE National Movement Leader Dr Hubert Minnis donated $7,000 to the Shell Saxons Superstars and $2,000 to the Valley Boys yesterday in the wake of Hurricane Matthew after the storm damaged many Junkanoo shacks and destroyed costumes.

During a press conference at his office on Parliament Street yesterday, Dr Minnis said: “It’s essential that our culture is maintained and essential that our Junkanoo groups still come out during the Christmas week as strong as they would’ve before the hurricane.”

The money was a personal contribution by the Killarney MP.

“I’m absolutely certain that the prime minister, who is a known Valley Boy, by tomorrow he will be doing the same thing and he will be giving $5,000 or more or $7,000 to the Valley Boys and $20,000 to the Saxons and he may even do more.

“I think as Bahamians we all must be more involved in the development of our culture and help to advance Junkanoo and I would hope that other civic leaders and organisations in the Bahamas will make similar donations.”

Brian Adderley, chairman of the Valley Boys, said while some will likely criticise Dr Minnis for donating to Junkanoo groups following a destructive storm, such a donation is valuable and important.

“I’m sure some people will criticise him for (this donation) because some people don’t see Junkanoo as being important to the Bahamian psyche but it is,” he said. “Those of you familiar with Junkanoo will know the people with a lot of stress, with a lot of personal and social issues, that get involved to get away from those things. We will play our role in the days ahead by providing entertainment and providing a space for persons who have stress to come and get that stress off.”

Mr Adderley said his group received structural damage to their shacks and some of their costumes were damaged by water.

For his part, Percy “Vola” Francis said the Saxons suffered severe damage to four of their main shacks.

He said it looked “like a bulldozer passed through Mason’s Addition,” when he visited the shack after the storm.

“You’re talking about everything looking flat and smooth. So we are grateful to Dr Minnis for his kind gesture in his contribution of this $7,000 that a will go a long way to help us try to resurrect ourselves from the ills we have found ourselves in recently.”

Mr Francis also expressed hope that the government will invest in Junkanoo this year like it did Bahamas Junkanoo Carnival.

“That same kind of contribution should be directed to Junkanoo because Junkanoo is the soul and the heart of the Bahamas,” he said.