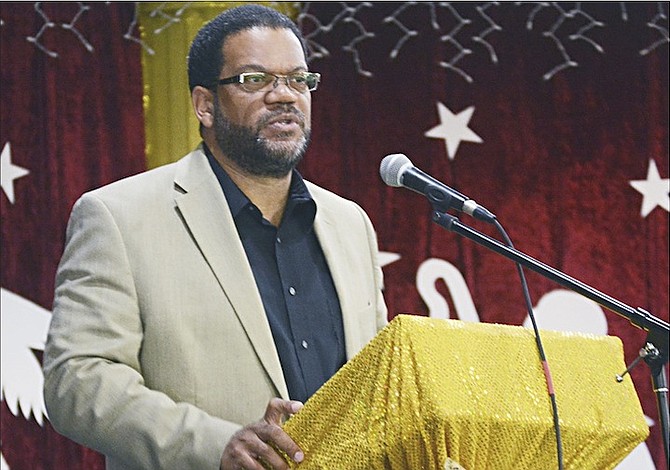 PASTOR Lyall Bethel yesterday criticised Prime Minister Perry Christie for “withholding” funding for the vote “no” campaign in the gender equality referendum next month, claiming that that the country “is deserving of hearing both sides of the argument and not merely the side that he thinks to be promoted”.

Pastor Bethel, a member of Save Our Bahamas, a group urging a no vote to constitutional amendment four on the grounds that it would open the door to same-sex marriage, said it is an “obscene miscarriage of justice” for Mr Christie to withhold funds from a legitimate side trying to present the other side of the arguments for this referendum.” Pastor Bethel also accused Mr Christie of “misusing” the Constitutional Commission to “not present both sides but to present one side”.

Pastor Bethel also said it is “grossly inappropriate and immoral” for the Prime Minister to be “treating the public funds as though it’s his own personal funds,” lamenting the fact that Mr Christie “has got the salaried ‘Yes Bahamas’ campaign”.

Last month Save Our Bahamas – the group that opposed the 2013 gambling referendum – submitted a letter to Mr Christie, requesting initial seed funding of $100,000 for its campaign. At the time, a representative of the vote “no” campaign said the group spent about $100,000 to promote their ideas in 2013, adding that a similar amount of money will be needed this time.

Yesterday, however, Pastor Bethel suggested that Mr Christie has yet to respond, much less honour the group’s request.

“It is an obscene case of injustice for the Prime Minister to withhold funds from a legitimate side trying to present the other side of the arguments for this referendum,” he said. “And it is grossly inappropriate and immoral for him to be treating the public funds as though it’s his own personal funds, when the entire Bahamas is deserving of hearing both sides of the argument and not merely the side that he thinks to be promoted.

“He’s had a two years head start on us, misusing the Constitutional Commission to not present both sides but to present one side, and now he’s got the salaried Yes Bahamas campaign, that are going about with their plane trips paid for, with their announcements and commercials paid for, whereas ours we still have to raise the money for.

“We are in Abaco (yesterday) with money that we had to go into our pockets to ride on the plane. And that’s just an obscene miscarriage of justice, and it’s shameful that our Prime Minister is acting in such a fashion.”

Nonetheless, Pastor Bethel said the group has managed to make strides in conducting its campaign throughout the country.

“They say faith without works is dead; our faith is in God to deliver and we show our faith by making sure that the public is informed about what is going on,” he said. “And so we have produced an hour long documentary, we’ve started to grow a lot of our commercials, but if the public would like to see them we’re going to need to be able to have the financing to get them placed on the various TV and radio stations.

He added: “We continue to ask the public that is concerned about the issue to feel free to aid us in getting the message out. They can make cheques payable to Grace Community Church, with a subscript for Save Our Bahamas campaign, and we’ll take it from there.”

Last month, Constitutional Commission Chairman Sean McWeeney said proponents of the vote “yes” and vote “no” campaigns for the upcoming constitutional referendum on gender equality should have equal access to public funds.

Mr McWeeney said at the time that if public money is used to fund the Yes Bahamas campaign - which group co-chair Sharon Wilson has confirmed is the case - then the government should give equal funds to a group representing the opposing campaign.

Mr Christie, meanwhile has not said if the government has or will give funds for purposes outside of operational issues relating to hosting the referendum, though officials have left no doubt which side they want to succeed, with most urging Bahamians to vote “yes” to the amendments.

Ya dumb a$$ and the governing party can all go to hell as far as I am concerned.

you pastors do not want equality, take a dose of your own medicine.

no equality in funding hahahahahahaha you pastors got plenty fools to part with their money to support you, be thankful.

The PLP party (& its government representatives) is a perverse, hedonistic, conniving, devil-inspired organization .......... the pastor is right in saying that what the PLP is doing is undemocratic and dictatorial ....... but God is alive and watching what is going on and his Holy Spirit will move across these islands and direct the fingers of His people to Vote NO .......... Perry's YES crew and religious cartel will not stand against the Church