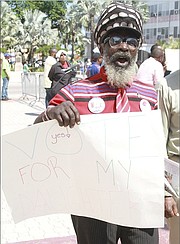 A supporter of the “Yes” campaign outside the House of Assembly on Wednesday. Photo: Tim Clarke/Tribune Staff

BAHAMAS Public Service Union President (BPSU) John Pinder has praised the passage of the four Constitutional Amendment Bills, saying that the nation would never become a “first world country” as long as it continues to have “barriers” against gender equality.

Mr Pinder, also the president of the National Congress of Trade Unions of the Bahamas (NCTUB), also highlighted his reservations regarding bill two and the more controversial bill four; however, he said he was satisfied that the proper “regulations” would be put in place to allay his concerns.

Mr Pinder made his comments outside the House of Assembly on Wednesday, immediately after the four bills were passed.

The bills will now move on to the Senate for a vote, and if passed by three quarters of the Upper Chamber, will pave the way for a constitutional referendum.

“Being a Christian nation, our concern would have been clause four; people believe that can create same sex marriages. We don’t want that to happen in the country.

“But I also understand the importance of men and women having equality. And this is something the trade union has been pushing and demonstrating for a number of years. We’ve tried to get balance even in our executive level. The trade union movement certainly supports gender equality.”

However, Mr Pinder highlighted his concerns with the second bill, which he said could lead to “marriages of convenience.” The second bill would allow a Bahamian woman who marries a foreign man to secure for him the same access to Bahamian citizenship that a Bahamian man has always enjoyed under the Constitution in relation to his foreign wife.

Mr Pinder also expressed what others have been saying about the fourth bill, that it could pave the way for gay marriage in the country.

“You don’t want persons marrying other persons just so that they can have the right to have citizenship, and then they turn around and make the marriage null and void, and then be able to marry some other foreign person and make them Bahamian,” he said.

“So we don’t believe you should have been able to pass on your citizenship by way of marriage unless there were some guidelines in there to ensure that you didn’t have a marriage of convenience.

“But once the regulations are there to guide that process, it shouldn’t be any problem.”

The fourth bill was passed by a vote of 34 members of Parliament supporting it, two voting no and one - Neko Grant - abstaining. Mr Moss and Bamboo Town MP Renward Wells voted against the bill. St Anne’s MP Hubert Chipman was absent from Wednesday’s vote due to illness.