Group Questions Any Change In Biblical Basis For Marriage 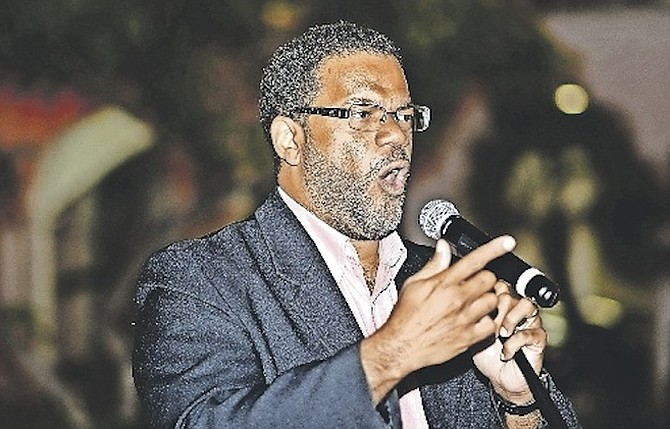 SAVE Our Bahamas, the group that opposed the fourth referendum bill, has questioned the basis for this country to “trample” upon the Preamble to the Constitution and “throw out” the Bible as the foundation for marriage.

The group was responding to Court of Appeal President Dame Anita Allen, who last week said the judiciary is likely to face challenges in determining whether same-sex marriages are legal.

She further pointed to “difficulties” inherent in the existing marriage laws that do not present any provision that parties to a marriage must be male and female.

Arguably, Dame Anita said the laws of The Bahamas do not discriminate on the basis of sex and facilitate not only marriages of every description but also consummation of the same.

However, her opinions of this country’s current laws pertaining to marriage were branded as an attempt to steal the thunder and celebration of what is considered a colossal victory for traditional values and Christian standards, according to Save Our Bahamas.

In the lead up to the constitutional referendum, the group urged Bahamians to vote against the fourth proposed constitutional change insisting that it was a veiled attempt by the government to legalise same-sex marriages.

“Even though the agenda intended to fast track same sex-marriage in The Bahamas has been derailed by the deafening ‘no’ vote in the June 7, 2016 constitutional referendum, operatives are digging deep within their legal war-chests to create new grounds to espouse their goal of desanctifying marriage in The Bahamas,” the group said in a press statement yesterday.

“Recent statements by Dame Anita Allen suggest that ‘now is the time’ for The Bahamas to reconstruct a new definition for marriage to include same-sex couples.

“We simply ask, on what basis do we trample upon the Preamble of our Constitution and throw out the Bible which has been the foundation for solemnising marriages in The Bahamas? Obviously, no consideration was given to the overwhelming four to one defeat of Constitutional (Amendment) Bill four to insert ‘sex’ in Article 26 (3) of our Constitution. Since the referendum, it has now become clearer to all that bill four was a covert strategy in support of same-sex marriage and the global homosexual agenda which is being championed by agencies of the United Nations.”

The group added: “Save Our Bahamas stands with the 65,696 voters who exercised their constitutional right to vote ‘no’ against same-sex marriage, clearly reaffirming our national commitment to an abiding respect for Christian values for both now and the future of our nation.

“Together, we stand resolute to protect the democracy of our nation by not allowing the changing social and secular humanistic philosophy of a few to dictate the moral conscience of the masses.”

Given the various challenges relating to the existing law, Dame Anita last week suggested that both the Marriage Act and the Matrimonial Causes Act require “reconstructing” to meet the needs of a changing society.

She also suggested that the Bahamas amend its Constitution similar to the way Jamaica did in 2008, in declaring that no marriage other than between a man and a woman is recognised and of legal effect. But this, she said, may similarly be susceptible to a constitutional challenge.

She said the country must choose what it wants to do in deciding the definition of marriage.

And after the highly controversial failed June 7 gender equality referendum – which saw a wave of pushback to question four that sought to prevent discrimination based on sex or being male or female – Dame Anita said this question neither opened nor closed the door to same-sex marriages.

Giving the eighth annual Eugene Dupuch Distinguished Lecture last week, Dame Anita stressed that her views were not endorsed by the Court of Appeal and were personal.

I don't see them carrying on about all the illegitimate births in this country.

I don't hear a word about all those with Sweethearts.

They are only interested in something that takes very little effort to get some attention to themselves.

I have not capitalized religious men as these men are fakes and not real Religious Men.

Serious... When the topic of homosexuality comes up, all the thieves, liars and adulterers all of sudden become the most Christian people you'll ever meet! lol

What are you talking about? Adultery is constantly preached against. the matter at hand is gay marriage, not adultery. Stop switching the subject

well , one writer in the tabloids refers to them as the SOB Pastors.

Save our Bahmaas = SOB lol

The acronym is a freudian slip lol.

The Preamble of our Constitution refers to God and Christianity .......... either we subscribe to that or change that Preamble .......... or maybe we have taken a page out of Uncle Sam's religious dissonance book

What this and other pastor's are saying to the people: "Stay ignorant and give us all your money."

The more christian this country is the more it will end up like a Taliban run one.

Sorry Save our Bahamas but everyone voted No for the PLP, the bible is a book just like a bloody comic book and honestly the stuff in the comic books sounds as made up as the stuff in the bible, floods and arc's and super hero's with super powers...... all made up crap for either entertainment or a means to control the lower classes.....

And i guess you believe in aliens or evolution

People. . .I see your responses. . .and to be honest. . .I quite frankly don't see how you guys can make some of these polemic and un-thought out replies. . .especially sealice. . .you stated a position on the Bible that you do not have the information to make. . .condemning persons for apriori declarations. . . YET DOING THE VERY SAME THING YOURSELF. . .TO DISPROVE THE POSITION OF THOSE PASTORS ON THE BIBLE!! You are not serious. . .are you? You know a professor in reasoning will give you a F. . .or ask you to take another class. . .not one that require high order thinking skills! Lol! But good Sir/Mam. . .I think that you are just "playing the fool" my old mother used to tell us children when we say something that makes very little logical sense!