Equal Rights Referendum ‘Should Not Be Delayed’ 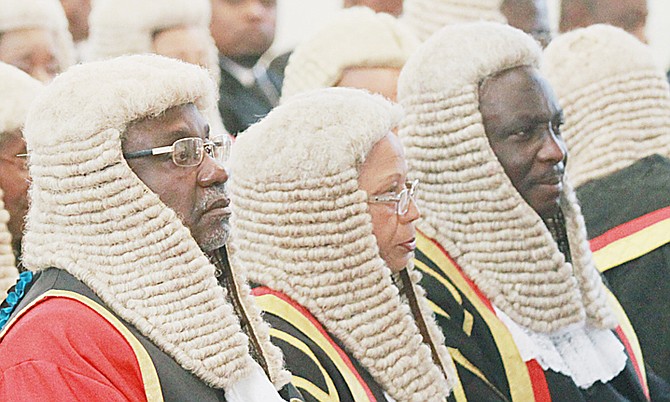 CHIEF Justice Sir Hartman Longley has urged that equal rights for Bahamian women should not be delayed by critics who believe an amendment to the Constitution would facilitate the legality of same sex marriage.

The top judge recently spoke on the controversial issue at the opening of the new legal year, during a ceremony in the Supreme Court.

Addressing scores of judicial officers at the event, Sir Hartman declared his “unequivocal support to the efforts being made to provide legislatively for the equality of men and women before the law.”

“As I listen to the public discourse on the issues, I think it is unfair, for the reasons being given, that Bahamian women and those who support them are finding opposition to legislation which is primarily intended to level the playing field and correct an historical anomaly,” the chief justice added.

A recent report by the World Bank Group, titled “Women, Business and the Law 2016,” listed The Bahamas as one of 22 countries in the world whose constitutions do not allow for married women to convey their nationality to their children and spouses in the same way that men can.

Similarly, the report noted that the Bahamas is one of 44 countries in the world in which spouses do not have equal rights to convey citizenship. As such, the report cited the Bahamas as being one country of many that hosts “gender-based legal restrictions.”

“I say it is unfair because it appears that Bahamian women and those who support them are being asked, in some cases, by their opponents to either guarantee or prove beyond reasonable doubt that the proposed constitutional changes would not lead to the recognition or validation of same sex marriages before they support the bills. No one can give that assurance or guarantee,” Sir Hartman stressed last Wednesday.

“Anyone who has traversed constitutional law would know that the legal landscape is littered with examples of language in a constitution when construed broadly and purposively as constitutions are construed, leading to unintended consequences becoming the law, although it may not necessarily lead to them.”

He added: “Because constitutions are construed broadly and purposively, one may have difficulty guaranteeing a particular constitutional result no matter the force of the opinion.”

“Would the proposed language lead to the result the opponents contend for? I would not venture an opinion at this stage. However, I would say that in any event, judicial decisions are sometimes reversed by later statutory or legislative interventions.”

During the summer of 2014, Prime Minister Perry Christie tabled the four Constitutional Amendment Bills in the House of Assembly, which must be passed by three-quarters of support in both houses of Parliament for a referendum to be held.

The first bill would enable a child born outside the Bahamas to a Bahamian woman and a non-Bahamian father to have automatic Bahamian citizenship at birth. However, the government does not plan to have the clause operate retroactively.

The second bill would allow a Bahamian woman who marries a foreign man to secure for him the same access to Bahamian citizenship that a Bahamian man has always enjoyed under the Constitution in relation to his foreign wife.

The third bill seeks to remedy the one area of the Bahamas’ Constitution that discriminates against men based on gender. Presently, an unmarried Bahamian father cannot pass his citizenship to a child born to a foreign woman.

The bill would give an unwed Bahamian father the same right to pass citizenship to his child that a Bahamian woman has always had under the Constitution in relation to a child born to her out of wedlock, provided proof of paternity.

There is concern in some quarters that bill four, which seeks to end discrimination based on sex, could pave the way for gay marriage. The government has repeatedly said this concern is unwarranted.

Notwithstanding this assurance, Sir Hartman’s predecessor, Sir Michael Barnett, has already said that the Bahamas will have to address the issue of same sex marriage at some point because Bahamian society cannot “pretend these issues do not exist.”

Alright.... they could hold a vote for gambling, and still go ahead with it regardless of the vote....

They could throw VAT on us

They could decide to mutilate our Healthcare system with a unilateral NHI mandate....

BEY!!!!!! Y'all stop talking fool. Just pass the damn law if you want, or don't if you don't. Stop wasting everyone damn time and money for what y'all keep hoping will be a political card in yah hand come election time.

All a y'all is uselss

Will never see the light of day with this crew runnin things, dem who ain misogynistic, sissy, even the women 'mongst dem don't speak up on their own behalf.

What is the point of a referendum -- this useless PLP government ignores the will of the people anyway? Just pass the damn law and be done with it.

The Bahamas is suppost to be a democracy right????

So eve. Though we r a christian nation every Bahamian has the right to freedom of speach, vote etc

So even though there is a large number of homophobes in our amazing country that doesn't mean we don't have a gay population.

Did u know that we have more than 100 gay citizians .

Im not gay and i know what the bible says but just as we need dual rights for woman we need marriage equilaty and gender equality also because no matte how muchmost people may hate gays we as a nation a democratic nation actually, so that means Everyone should have equal rights even gayys but our government is to ignorant to understand that and our churches rare scaring gays did u know that all of the first world countries has equality for everyone and even the religous ones.

As a tourist destination we would make billions of dolars and become more of a democracy with equal rights.

There is no way to prevent gays in our country because our children and I mean some not all are born like that u know and y'all can't say they choice to be like that because 1.no one wants to be something everyone hates 2.many may disagree but this is fact that God himself made gays and God makes No mistakes but people in our country are brain wshed by our older generations of homiphobes

The PLP know that they cannot change the Constitution without a pro-citizen vote ........ and the PLP have burned all of their bridges with the Bahamian public ....... so they just doing what they can do with their Parliament majority ............ sorry, there will be no more Referendums this term