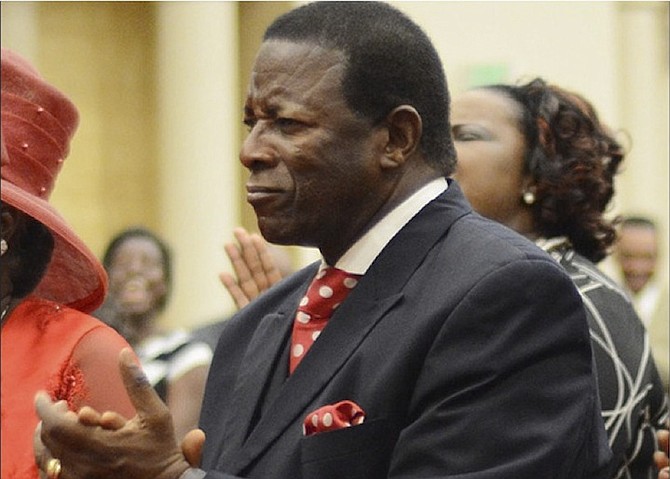 BISHOP Walter Hanchell said yesterday he believes the upcoming referendum is not about gender equality but rather about “making provisions in our Constitution to accommodate same-sex marriages in order to bring The Bahamas in line with other nations”.

In a press statement, Bishop Hanchell, chairman of Citizens For Justice (CFJ), said his group is “strongly opposed” to same-sex marriages or unions and will oppose all efforts to have “this abomination” legalised in The Bahamas.

He said God has never approved two males or two females marrying or raising a family and the practice is “evil in its highest form”.

“We are of the opinion that if the wording on the bills are not put into a form that will make it clear that marriage be only between a male at birth and a female at birth and also assure the Bahamian people that same-sex marriages and same-sex unions will be prohibited and remain illegal as was done in Jamaica, then these bills will be soundly rejected in the upcoming referendum,” the statement said.

“Whenever people stand up against the gay agenda, they are labelled as being homophobic and are disenfranchised. In spite of what is happening in America and the European Union, God has never approved for two males or two females to marry or raise a family. This is evil in its highest form.

“CFJ will never support or condone gay marriages and cry shame on pastors, politicians and special interest groups that are shaking their fists in the face of God with this abomination.

“Both major political parties along with some misguided religious leaders are complicit in promoting these bills to be enshrined into our Constitution. While CFJ respects their views, we do not agree with their interpretation and believe that bill four is the real reason for the referendum and is a plot to satisfy special interest groups, the United Nations and the LGBT community in The Bahamas.”

Bishop Hanchell also said it is CFJ’s observation that women in The Bahamas can do and have everything that is available to men and they have heard no outcry from women concerning inequality or discrimination before the political agenda of this referendum.

He also said he has written Prime Minister Perry Christie requesting money to fund the organisation’s vote no campaign.

“It is not known whether the government will do the right thing even though prominent persons such as Sean McWeeney, chairman of the Constitutional Commission and Senator Carl Bethel have recommended that funding also be granted to groups opposed to the bills. We believe that the government of The Bahamas has a responsibility to explain any negative consequences the bills may have on The Bahamas, however they have refused to do so because they do not want people to hear the truth.

“Subsequently, we will be voting ‘no’ on all of the bills and will be advising Bahamians everywhere to do likewise and reject these flawed bills.”

The referendum is set for June 7.

Ya'll "Christian gentlemen" don't seem to have no problems wid the sissies dem when dey puttin sumptin in yinna plate on Sunday. Ya'll don't seem to have no problem wid the sissy pastors dem foolin wid the young boys in the congregation or the "straight" ones "counseling" the young gals in da back seat of dey car, on da rug in dey office or even in da wife's bedroom. Alla ya'll need to get a life and find Jesus..

The only Bill is No. 4 that could cause anyone to vote "No" on.

This man is so misleading. He counts on the fact that Bahamians don't bother to read.

Way too many morons with the title bishop in this country....

When you look at these bills separately, they may seem harmless, but as a group of bills together (legislation) they are basically creating persons 'with no national boarders'. Since children can inherit nationality from either or both parents, or in many instances from the country of birth, and in other instances from the country of either of or both of their parents. So basically, at least for the sake of argument, this person is virtually without boarders. An alien with more rights than a person born to married parents, and in their country of nationality. Now to bill number 4. Follow this closely and don't get confused: Remember too that legislation is a living, working tool that will be effective as long as it isis on the books. Some fear that Bill #4 will lead to same sex marriage. But that may be among the least of concerns when you see what is happening in the US today. First they fought for equal rights, based on sex, and so they were granted sexual equality. Then there was a fight for same sex marriage and that was granted. Then they fought for the right to sue anyone (professional be it minister, bakery, wedding planners, hotels, reception halls) who refused to participate in a gay marriage.That battle was won except for one State in the US, Mississippi, who allows persons to refuse service based on their religious beliefs. Now the fight is over bathrooms. North Carolina requires a person to choose a bathroom based on the sex that appears on their birth certificate and has been blacklisted because of this. But while other states have tried to accommodate gay and transgender person's potty needs, the fight has jumped up to even a higher notch. Persons are claiming that the sexual organ that they have below does not determine their sexuality. Do you know what that means? firstly when a child is born, a doctor can no longer declare it to be male or female. He can note if it was born with male or female genitalia but he cannot any longer pronounce it male or female. the person will determine that at the age of maturity. And guess what? According to them, if they are male and start feeling their female hormones, they should have the right to change their sexual classification, despite what organs they have. So what does this mean. The next time you travel to Miami and you (female) decides to use the restroom, a big blurry, 7 foot lumber jack looking guy can follow you into the bathroom and you can do nothing about it. All he has to do is claim he was feeling like a female and decided to use the female restroom. Well except that Florida has the 'stand your ground' law and if you really feel threatened by him and that your life may be in danger and you have a gun, you can shoot him. then you will have to answer to the LGBT community thereafter.

And men will face a similar plight. Imagine you go to use the restroom and there is a transsexual male, dressed as a female that has a crush on you. He can follow you into the male rest room and invade on your rest stop. So basically these people do not just want rights. They want to infringe on your rights as a natural hetrosexual male or female, and in some instances take some of your rights away. And maybe you have heard the song about guys in the US mostly sleeping with 'trannys'. Well you see the process from changing a male body into a female is a long and complicated one. Not only does there have to be physical change by psychological as well. And once these trans-gendered females feel they are ready, they begin dating (unsuspecting) men. They have to test to see if the new organs are working properly and sometimes along the way the men who they date do find out and the experience is not a good one. Many are devastated. Their male ego is crushed. But what is even worse than this is the experience with she males. These are men going through a sex change. While they may appear as females, they still have working male organs. And they date young men and sometimes their secret becomes exposed. Sometimes they do it intentionally and it destroys they young man they are dating. Some tell the guys, you are one of us now just like in the vampire or zombie movies, once you get bitten or touched, you become one of them. But bill #4 will bring protection to all of these people (eventually) never mind that they may impose on your rights as a hetrosexual male or a hetrosexual female. So now put the legislation together and what have you created? A person with no one nationality and no sexual gender...or both, an alien hermaphrodite? And they will have full protection under the law.

gay men can do that now if they wanted and I am so sure that's a problem that men just secretly abide. (deep sarcasm here). you are talking rubbish,

what have you been drinking john..lol

"OK, so where will the trillions of dollars that are needed to implement these new "global goals" come from?

Let me give you a hint – they are not going to come from the poor nations.

When you read over these "global goals", many of them sound quite good. After all, who wouldn't want to "end hunger"? I know that I would like to "end hunger" if I could.

"e following list comes from Truthstream Media, and I think that it does a very good job of translating these new "global goals" into language that we can all understand ...

"Goal 16: Promote peaceful and inclusive societies for sustainable development, provide access to justice for all and build effective, accountable and inclusive institutions at all levels Translation: U.N. "peacekeeping" missions (ex 1, ex 2), the International Court of (blind) Justice, force people together via fake refugee crises and then mediate with more "U.N. peacekeeping" when tension breaks out to gain more control over a region, remove 2nd Amendment in USA Goal 17: Strengthen the means of implementation and revitalize the global partnership for sustainable development Translation: Remove national sovereignty worldwide, promote globalism under the "authority" and bloated, Orwellian bureaucracy of the U.N. If you doubt any of this, you can find the official document for this new U.N. agenda right here. The more you dig into the details, the more you realize just how insidious these "global goals" really are.

The elite want a one world government, a one world economic system and a one world religion. But they are not going to achieve these things by conquest. Rather, they want everyone to sign up for these new systems willingly.

The "global goals" are a template for a united world. To many, the "utopia" that the elite are promising sounds quite promising. But for those that know what time it is, this call for a "united world" is very, very chilling."

I want some of whatever that bishop is smoking.