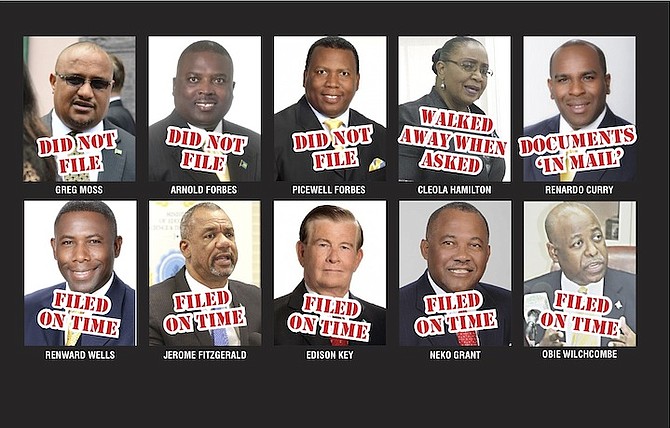 WHILE the March 1 deadline for members of Parliament to file financial disclosures has passed, three more MPs have confirmed that they have yet to declare their assets, which is required by law.

Another elected official, South Beach MP Cleola Hamilton turned and walked away, refusing to answer questions about the status of her financial declarations when she was approached outside of the House of Assembly on Monday.

This comes after Prime Minister Perry Christie refused to answer questions regarding his financial disclosures last week and Deputy Prime Minister Philip “Brave” Davis’ uncertainty over which year he filed.

Mr Moss, who is also the leader of the newly formed United Democratic Party, admitted that he “just realised” he had not filed because he was caught up in matters regarding the four Constitutional Amendment Bills that are set to be voted on during the June 7 referendum.

“You know I totally missed the deadline because I was busy with the constitutional bills,” Mr Moss said.

“I just realised that I didn’t file but I intend to file within the next 14 days. I have already called in the needed financial documents from the bank so I am waiting on those.”

Meanwhile the Mt Moriah MP said he planned to file by the end of the week, while the Central and South Andros MP said he would do so by today.

Central Abaco MP Renardo Curry told The Tribune that his documents “were in the mail.”

Education Minister Jerome Fitzgerald and Tourism Minister Obie Wilchcombe have each said their declarations have been filed.

Tall Pines MP Leslie Miller, who last week said his documents had not been filed, told The Tribune this week that he has since completed the process.

Southern Shores MP Kenred Dorsett said he has since completed his filing process after telling The Tribune last week that he was waiting on documents from his bank.

According to the Public Disclosure Act, a summary of the declarations shall be published in the Gazette and any person who does not comply with the law is liable to a fine not exceeding $10,000 or imprisonment of not more than two years.

If a parliamentarian deliberately does not disclose property owned in The Bahamas, the land can be seized and forfeited to the government. The disclosures have not been made public since 2012, an election year.

This comes amid increased calls from the public for elected officials and senators to face penalties for failing to file the annual financial declarations. It also follows a recent US State Department report that highlighted the subject of corruption and government transparency.

The 2015 Country Reports on Human Rights Practices in this country further took issue that there was no independent verification of annual public disclosures from senior public officials, and called the annual submission rate “weak” unless it was an election year.

Public Disclosure Commission (PDC) Chairman Myles Laroda insisted on Sunday that the decision to prosecute someone for breaching the act is left up to the discretion of the Office of the Attorney General.

He explained that the commission’s power is “basically limited to writing,” maintaining that the attorney general would have to give the nod on whether a member of Parliament or top ranking civil servant would face charges over failing to adhere to the stipulations in the Public Disclosure Act.

That means that the Attorney General will take the same action as has been done on Real Property Tax evasion......NOTHING

Those that did not file or were delinquent .......... need not re-apply for nomination ...... that should be a simple principle of being a public official in leadership ...... we have the votes

LOL Cleola walked away? Wow.Also, I've never even heard of Renardo Curry before. Who is he?

He's the guy who won the North Abaco seat when Ingraham stepped down. PLP.

Those that have not filed are BREAKING THE LAW! Is The Bahamas a country where the rule of law is upheld? It seems NOT! The parasites that rule this country can not obey their own laws. Just the example our crime ridden country needs, BRAVO!