Govt Funds ‘Should Also Go To No Campaign’ 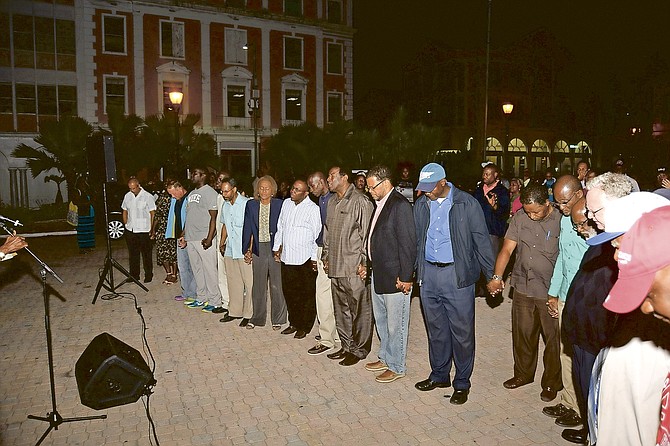 Prayer in the Square rally to support the ‘No’ vote in the gender referendum. The pastors present at the rally are pictured holding hands as they pray. Photos: Shawn Hanna/Tribune Staff

CONSTITUTIONAL Commission Chairman Sean McWeeney has said proponents of the vote “yes” and vote “no” campaigns for the upcoming constitutional referendum on gender equality should have equal access to public funds.

His comments came after groups urging Bahamians to vote “no” to at least one of the proposed amendments went public with their stance in the last week.

Prime Minister Perry Christie has not said if the government has or will give funds for purposes outside of operational issues relating to hosting the referendum, though officials have left no doubt which side they want to succeed, with most urging Bahamians to vote “yes” to the amendments.

Mr McWeeney said he expects the government will give money to help fund the vote “yes” campaign, with the likely recipient of that money being the “YES Bahamas” referendum campaign that was launched on April 10 by Mr Christie.

If public money is used to fund the group’s work as he expects, Mr McWeeney said the government should give equal funds to a group representing the opposing campaign.

Legal precedents set by countries like Ireland and Australia have established this, he said.

“I fully support the idea of an organised vote ‘no’ campaign having access to public funding if it’s being made available to the vote ‘yes’ campaign,” he said yesterday when contacted by The Tribune.

“There’s very strong case support for that, cases in Ireland where this has been litigated for example. If taxpayers’ money is going to be used to fund the advocacy for one side of a referendum, then equal amount should be used to fund the opposite side.”

If the government heeds Mr McWeeney’s advice, it will be placed in the awkward position of allocating funds that could help increase the likelihood that an outcome contrary to its desire emerges.

In 2002, former Prime Minister Hubert Ingraham decided not to use funds from the Public Treasury for issues not relating to the operation of the referendum.

Public funds were limited to reproducing the bills, printing posters and costs associated with sponsoring the referendum. That referendum was not successful.

Reacting to Mr Christie’s appearance at the event launching the “YES Bahamas” campaign, the bishop, who opposes the second and fourth bills, said in a statement that those who don’t support them should be “given the same resources and opportunities by the government to present their case.”

Similarly, the Save Our Bahamas Committee, a group which opposes the fourth bill, on Sunday requested seed funding from the government, arguing that the government would give money to fund the vote “yes” campaign.

The group said it intended to deliver a letter to the Office of the Prime Minister yesterday requesting $100,000.

If the government decides to use public funds for purposes outside of operational issues relating to the referendum, it could face a challenge in determining which groups should receive the money.

“More than one group could be contending,” Mr McWeeney noted. “One of the groups organising the ‘no’ campaign [the Save Our Bahamas Committee] is made up of learned clergymen. Lyall Bethel, a responsible leader in the religious community, could be trusted to apply the money as expected, for instance.”

However, Save Our Bahamas opposes the fourth bill but supports the three other bills whereas Bishop Hanchell’s group, Citizens for Justice, opposes both the fourth and second bills.

The government could therefore end up having to determine how to allocate money among groups that have different objectives.

The second Constitutional Amendment Bill seeks to give the foreign spouse of a Bahamian woman the same right to apply for citizenship that a foreign wife of Bahamian man enjoys. The fourth amendment seeks to end discrimination in the Constitution based on sex, which has been defined as being “male or female.” Some critics believe the fourth amendment would inadvertently lead to gay marriage.

The referendum is scheduled for June 7.

The fact is that the Government of the Bahamas should never have embarked on a "Vote Yes" campaign. They should have initiated a task force to educate and inform Bahamians about the bills and the effect they will have on them. The decision to vote 'yes" or to vote 'no" should have been left to individuals and the government should have remained neutral. If other private groups, like church ministers, Save the Bahamas and Rodney Moncur and others want to go on campaigns to persuade citizens to vote one way or the other, then that is their rights but it is not the government's call to tell people how to vote. The reason I will not support these bills is because the same people who brought the referendum in 2002 are now opposing it and the people who are bringing the bills now opposed them in 2002. This signals that these bills are foreign and has nothing to do with the rights of Bahamians or Bahamian women in particular. See what happened in Trinidad.