Rollins And Wells Defect To Fnm 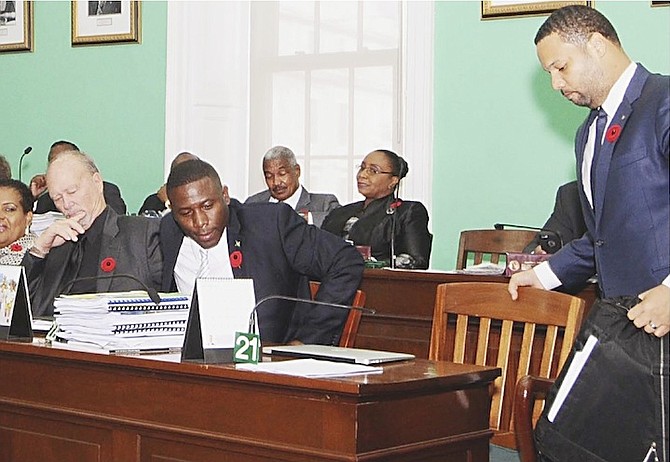 Do you think the FNM will benefit from the defection of Renward Wells and Dr Andre Rollins?

In response to the move, Prime Minister Perry Christie described the PLP as a big tent with a revolving door as he told parliamentarians that he had long expected both men to cross the House of Assembly’s floor.

Mr Christie suggested that he was now considering drafting legislation to block MPs from switching sides without resigning from their seats, which would cause a bye-election, as they are elected by voters to represent a particular political party.

While congratulating the MPs, Mr Christie also suggested that his party’s success in the upcoming 2017 general election would not depend on Wednesday’s events, but with the Bahamian electorate.

He stood in the House to respond to both MPs after they read passionate resignation speeches in the morning session of Parliament.

Dr Rollins quit the party and became an independent MP in June saying he no longer felt wanted in the PLP. This came after months of contention with members of the PLP as he frequently criticised Mr Christie and the party’s governance.

Mr Wells was fired as parliamentary secretary by Mr Christie in October 2014 after becoming embroiled in several months of controversy on signing a $600m letter of intent with Stellar Waste to Energy Management without the proper authorisation.

He was the third MP to quit the PLP since the party was elected to government. Marco City MP Greg Moss left the PLP in June.

The MPs were granted permission to make

personal statements in the House of Assembly yesterday by Speaker Dr Kendal Major. He said prior to the session, the statements were reviewed and were thought to be of national importance.

Following several statements by ministers, Mr Wells made a passionate address in which he reflected on his time in the PLP and called his signing of the LOI a “teachable moment,” using the phrase frequently used by Mr Christie.

Mr Wells said: “Mr Speaker this brings me to the very public matter of the letter of intent signing. Notwithstanding the words and actions of senior politicians, I have taken responsibility for the LOI matter because I proceeded without written approval. As some would say that was a teachable moment.

“From that teachable moment and onward, Mr Speaker, I began to transition both mentally and emotionally to the point where I ceased to be a member of the Progressive Liberal Party.

“This moment in this Parliament for me is just such a transition. There is a time and a season and a purpose to everything under heaven. A time to be born and a time to die. A time to sow and a time to reap.

“I now choose to associate myself with the alternative government and all those who seek new leadership and a better, brighter, booming Bahamas. I, therefore, wish to advise that I am joining forces with the members of the Free National Movement and wish to be reseated in this honourable House.”

He then proceeded to move his belongings from the backbench and reseat himself on the front opposition bench to the applause of FNM MPs.

Dr Rollins then stood, saying he was removed from a party that helped him to be elected to Parliament. He said he was hopeful that his constituents would understand the move and endorse the actions.

“The offence for which I was tried and convicted was that I dared to tell the emperor that he has no clothes,” Dr Rollins said. “My strong convictions and passion to see positive changes in the governance and development of this nation were not appreciated.

“I ran into a wall of resistance built on a foundation of intolerance to internal dissent. The promises of change were hollow, as our nation continues to be beset by the same problems I cited when I joined that party almost five years ago. Sadly, under its watch as government, these problems have grown worse. I am left with two choices. I can resign myself to the notion that our problems are too big to be fixed and retreat from public life; or I can stay the course and continue to fight for change alongside those who share the conviction that our nation has a future worth fighting for.”

He added: “Mr Speaker, while I concede that I am prepared to give up on a political party that refuses to embrace change, I refuse to give up on my country and the Bahamian people who desperately want to see this country change. Let there be no doubt about my commitment to stay the course and fight for a more secure and prosperous future for our beloved Bahamas. It is time to turn the page on the past and move into a new chapter in our nation’s future.

“I exercise my conscience by joining the ranks of the members of the Free National Movement here in the House of Assembly. May this honourable House be so advised.”

In response, Mr Christie said: “Mr Speaker I want to be able to congratulate them for their decision as young Bahamians but the enormity of it I think it is important for me to impress upon the country yet again.

“This the image that Bahamians will see speaks volumes and as we move into the future those who know me knew that as a result of what happened in the last term, I had contemplated legislation to constitutionally not allow it to happen again without there being resignations.

“And it is always a challenge in our democracy of whether you say that people who are elected to one party and decide to join another party, to let the people decide or alternatively a democracy where these things happen and we allow free will to take place. So it is a challenge that we have in what is the right balance.

“But now that this has happened and I was waiting for it to happen we are able to have that kind of discussion.”

Mr Christie also responded to Dr Rollins who referred to him as “an emperor” with no clothes on.

“With respect to the member for Fort Charlotte, whether the emperor is someone who we know or we (are) just making a reference to literature and the whole concept of change, the emperor in the Progressive Liberal Party has clothes on. He doesn’t need the proverbial little boy to say ‘oh the emperor (is) naked’ because that is the true interpretation of that particular statement. It was a little boy who said the emperor is naked.”

Banker! You crackin me up! Lol

they too lie what you expect

Taking someone like Renward Wells into the FNM fold in parliament says all one needs to know about Minnis and the FNM party today!

Less we forget it was Dr; Minnis who said something was wrong with Rollins wrist right on the floor of the house. and it was The same Doctor came after Wells with all the ammunition he could muster and he wanted Wells fired. Now according to Rollins he had some information about the letter of intent that Wells signed. If he or Wells had something to say. Why have they not said it by now. ? I really like Wells. Even now he is still not being rude. For some reason Rollins leads and he follows. Mr: Christie gave those young men a chance. they blew their chances. In my opinion they have entered a snake pit. some body is going to get bite and it is only a matter of time. Note they did not put Rollins close to Butler, so he may avoid being slapped.

Which is to say most everything in the HOA is theatrics and dramatics, and at the end of the day all dese people is co-workers and business buddies

When the opposition is quiet on a matter, someone benefited.

Regardless 4 years, 10 months ago

Everyone around them from both parties looks thrilled! Perhaps these two may become a serious issue. A picture tells a thousand words.

Who celebrate Guy Fawkes Day or even remember what he did?

Reports are the guy had just finished reading about all the fiascos, corruption and asinine political stupidity in Bahamas and immediately jumped overboard.

Watching the happenings in Bahamas has that affect on you!

BLT... "These two better not even think about getting any of my donuts, pizza, Wendys, KFC, Bamboo Shack, souse, McDonalds and diet coke!

Mike Lightbourn ... "Think they had to be seated right beside me? These new fellas gatta learn I don't deal with black people like that!

Leslie Miller... Well by dam on Sunday! Christie experiencing all kinda teachable moments every other week. At this rate he might actually learn something for true!