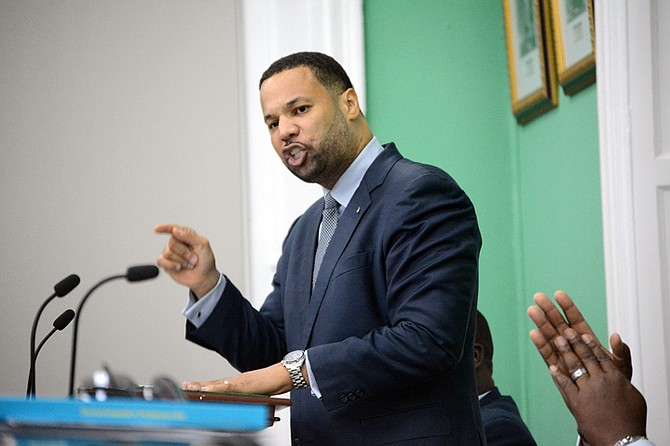 Andre Rollins in the House of Assembly.

FORT Charlotte MP Dr Andre Rollins has dismissed calls from some in the Progressive Liberal Party to resign from his seat and force a by-election.

Dr Rollins, who quit the PLP last Wednesday, said he suspects that the call from some members of the PLP for a by-election is because web shop operators may be expected to heavily fund the process.

He added that it is questionable that he would be asked to vacate his seat while the PLP says nothing about the lack of representation in the House of Assembly from Elizabeth MP Ryan Pinder.

Dr Rollins suggested that since Mr Pinder left Cabinet to take up a lucrative post with Deltec Bank, which he called a conflict of interest, he has been chronically absent from Parliament.

Mr Pinder held the post of minister of financial services before he was wooed to become a senior executive at the private bank.

The newly independent MP was asked to comment after PLP Trustee Valentine Grimes urged the “unsatisfactory” MP “to do the right thing and allow the residents of the great Fort Charlotte a chance to get their voice back” in a by-election.

“I would respond to Mr Grimes by saying that I will not entertain the thought of wasting taxpayer dollars to force a meaningless by-election,” Dr Rollins said yesterday. “The people of Fort Charlotte - PLP, FNM and DNA - will continue to have a forceful voice in Parliament through my representation. This is what a strong Bahamas needs from its elected representatives. I urge Mr Grimes and the PLP leadership to consider the fact that while they wish for me to resign in Ft Charlotte, they have condoned Ryan Pinder’s chronic absence from the House’s proceedings while he works as a lobbyist for a private bank on the public’s dime. In the process, the people of Elizabeth have no representation in the House of Assembly, but for obvious reasons Mr Grimes and the PLP leadership find no fault with Pinder’s blatant conflict of interest.

“Furthermore, I suspect another motivating factor in Mr Grimes’ call for a by-election is the expectation that the web shop operators will be used to heavily fund a PLP by-election campaign. “ . . .This is yet another reason why our democracy needs campaign finance legislation. So, my response to Mr Grimes is no, I shall not be resigning my seat from the House to be a part of any wasteful and abusive exercise that would only serve narrow political interests at the expense of the Bahamian people. Hopefully, Mr Grimes turns his attention to the far more important business of (the) government’s efforts to reduce national unemployment and violent crime instead of attempting to create political distractions and conjure schemes to raise campaign contributions.”

He added that it was silly to ask a sitting MP to resign his seat only to run for re-election in that same area.

“Not only would it be a complete waste of taxpayer dollars, but it would make a complete farce of our system of government,” Dr Rollins said.

Last Friday, in the wake of Dr Rollins’ resignation, the PLP’s Fort Charlotte constituency branch said it welcomed another opportunity to work along with former area MP Alfred Sears, saying he was an effective representative who was well loved by constituents.

Dr Rollins’ departure from the governing party came a little more than a week after Marco City MP Greg Moss quit the PLP, citing leadership issues at the party and executive level.

Why should he resign???? He is not obligated to resign by the Constitution of The Bahamas.

Now he has to revert to his representation of the citizens of this country who support his views and are disillusioned with the PLP who came to power in 2012 on the promises of the Charter for Governance ........... In the same way that Doc Rollins (and Moss) has lost faith in the PLP 2012 promises ............. many who voted for the PLP have lost faith in the party ....... Doc Rollins is just a microcosm of the country and reflects the true spirirt of democracy ........ if you read the Constitution, it NEVER refers to MPs being duty bound to represent a party ...... there is NO reference to election of MPs as members of parties ......... this is a creature of convenience to control power and usurp the true spirit of democracy and creating this kleptocracy that we experience today....................... that is why we need to tear up the Constitution and begin to build a more modern and inclusive democracy in our country......... that is what the 2017 election should be about

So that would make him the Leader of the DNA and he could fire Bran. Now that sounds like a plan to me!

Comrades what in da hell they been putting in water wells cuz ever since Lynden Pindling lead the PLP to winning 18 seats to tie United Bahamian Party's also won 18 House seats. da Fort Charlotte constituency been figuring in we general elections. It was during an January 11th, 1967 interview Pindling remarked that; "We expected a closer fight in Fort Charlotte where he figured da NDP's Turnquest would have been able save his election deposit.

Rollins can now represent everyone who is fed up with the PLP.

Dr. Rollins shoulders are broad enough and he is well proven man enough to represent everyone in the country who is fed up with the PLP!

Good Lord almighty we have a PLP party in power that hasn't held a convention since something like back in 2009. But also the FNM only held their party's convention to try to settle personal infighting matters between Comrades Minnis and Loretta, not for its membership. Look at the DNA they have NEVER had what could legally be classified as a party convention, acting like a properly constituted political party but truth be told they have NO membership elected party leader of executives.
You go figures for ya self, why we is a broken islands nation?