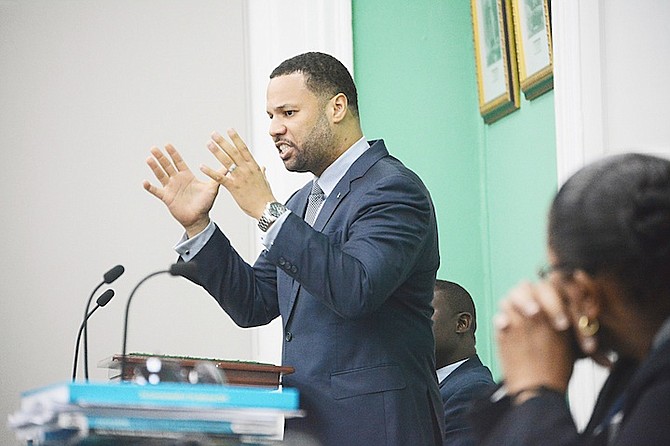 PLP trustee Valentine Grimes yesterday challenged Dr Andre Rollins to resign from his Fort Charlotte seat and allow the constituents “to choose the representative they deserve”.

The call for a by-election came a day after Dr Rollins quit the governing Progressive Liberal Party as he wrapped up his budget contribution in the House of Assembly on Wednesday night.

Mr Grimes urged the “unsatisfactory” MP “to do the right things and allow the residents of the great Fort Charlotte a chance to get their voice back” in a by-election.

Mr Grimes headed the PLP disciplinary committee responsible for determining the fate of Dr Rollins after the parliamentarian criticised Prime Minister Perry Christie last year. He also served as the PLP’s MP for Fort Charlotte from July 1977 to 1992.

“The residents of Fort Charlotte are used to great representation,” he said when contacted yesterday. “They have been indicating for some time now that they weren’t happy with Mr Rollins and wanted more.”

He added: “If he is so sure he stands with the people and for the people of Fort Charlotte he should give them a chance to confirm or deny that. The respectable thing to do when you resign from a party mid-term while holding a seat is to resign from that seat as well.

“Give the seat up and allow the residents to decide who they want to represent them.”

Party sources have maintained that many area residents want former MP Alfred Sears to return, insisting that he was a man of the people.

“Alfred Sears was an excellent member of Parliament,” Mr Grimes said. “When he made the decision to step away, the residents were concerned that we wouldn’t be able to replace him with someone good. They knew what he brought to the table and what he stood for. During his time in office he gave this area all he could and that is what the people of Fort Charlotte deserve.”

Yesterday The Tribune canvassed the Fort Charlotte constituency and some area residents were supportive of the possibility of Mr Sears’ return.

Many expressed disappointment with Dr Rollins’ representation and claimed he is not visible in the area.

“Rollins, hell no with Rollins,” long-time resident E R Hanna said. “Mr Sears was always for these people around here, everything he did was to improve this community and that is what we loved about him. Unlike Rollins, he actually stood for the people. Rollins never comes around, his intentions are good but his execution leaves much to desire.”

“This is real life to us, we need more than a speaker, man. We need a representative that does the right things,” Mr Davis said.

“He gave the run around, he walk these streets telling the people he will do this and do that and one week after election phone numbers change and you can’t see him no more.

“They come around every election - tell you this, tell you that - and then vanish once you elect them. (Andre) Rollins did the same thing. Just how he could call meeting before election, sit and communicate with us, he could have done the same before he made this decision. All he had to do is talk with us and let us know what was truly going on. This could have been different.”

The Ft Charlotte resident said it has been “months” since he has seen Dr Rollins in the area.

“He made it seem as if he was here with the people, doing all of this for us - it sounds good, but he doesn’t,” Mr Davis added. “Look at this community, it’s tough. But when you hear him on the news and see him on the (television) he is talking completely opposite of what he is doing.

“His constituency allowance hasn’t helped us. He doesn’t come around anymore – it’s a lot working against him.”

When asked about a possible return by Mr Sears, Mr Davis said with a smile: “We want people who want to work for us, we aren’t loyal to colours - we ride for the people who ride for us in the good and bad times.”

During his emotional resignation, Dr Rollins said that it was clear he was no longer wanted in the party after other PLP members made attempts to block his contribution to the budget debate.

He said that while he had no prior intention of resigning from the party, he “would be a fool” to call himself a PLP after the way he was treated at the time.

and, if he runs and wins or if the fnm runs someone and wins, famous last words were never spoken-- it is an omen of the election to come.

become millionaires now before the window of opportunity closes.

Dr. Andrea Rollins should leave things as they are now and "put it on them at every sitting of Parliament".

Why doesn't Valentine Grimes and the PLP call for a general election NOW!

He has balls. Remember PLP's must agree with everything the party leaders say, no alternative views are acceptable.

I don't know if Dr.Rollins have been a good MP for his area. What I find interesting is that now that he left the PLP all of a sudden he is not a good MP. I suppose if he was bowing to the wishes of the "old guard" he would have been a great representative. And by the way what do they mean by good representation? The one that Centerville and Bain Town gets?

The PLP is what it is today because deep down in its bowels it still has the most horrible stench of the likes of Valentine Grimes, George Smith, Ruby Nottage, Sean McWeeney, Frank Wilson aka Snake, Bradley Roberts, etc.

I second your motion, Well_mudda_take_sic

#When asked about a possible return by Mr Sears, Mr Davis said with a smile: “We want people who want to work for us, we aren’t loyal to colours - we ride for the people who ride for us in the good and bad times.”

I wonder what evidence he has that Mr Sears is that man...Rollins was a PLP candidate too

What I deduce from this statement is that Mr. Davis is saying that he does not necessarily supports the PLP but would be open to the FNM or DNA parties-"we aren’t loyal to colours "