Fnm Suspended From House After Protest Against Gray 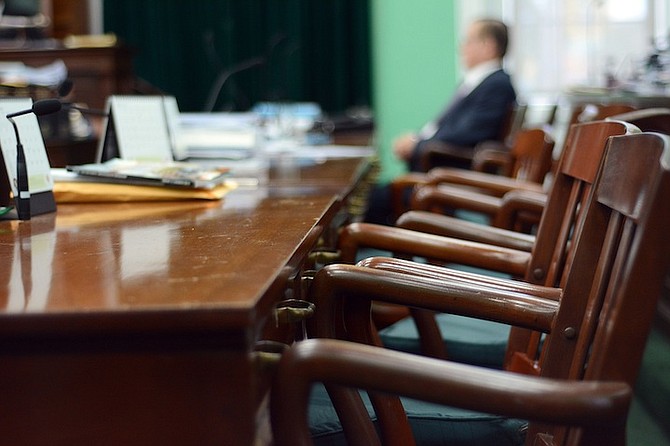 The empty seats of the Opposition in Parliament yesterday after FNM MPs were suspended following their continued protest against V Alfred Gray. Photo: Shawn Hanna/Tribune Staff

Following the opposition members’ ejection from the session, Dr Minnis told The Tribune that the Free National Movement will remain resolute in its position to oppose Mr Gray each time he speaks in the Lower Chamber.

The party has criticised Prime Minister Perry Christie over his handling of allegations that Mr Gray interfered in a court case after Mayaguana Administrator Zephaniah Newbold sentenced 19-year-old Jaquan Charlton to serve a prison sentence for assaulting a police officer.

He later released the man, alleging that Mr Gray threatened him into doing so – a claim Mr Gray has strongly denied. After a police investigation into the claims, the Office of the Attorney General decided not to pursue charges against anyone.

The row began as Mr Gray stood to make a contribution to the 2015/2016 budget debate. However, as he began to speak, several opposition MPs violently banged their desks preventing the MICAL MP from continuing.

This angered seated PLP parliamentarians, who shouted from their seats in protest. It also led the Speaker to raise his voice and stand, demanding that the session come to order.

He warned the opposing MPs to discontinue banging on their desks.

He said: “Members you are showing utter disrespect, both sides, but let me say this for the record, the member for MICAL has a right to speak in this place today. You are not going to deny him that right. I am not sure of your intention, but unless you are cheering him on you are not going to come here and make noise to disrupt and molest the member.

“The same way we are trying to avoid molestation of every single member in here, how can I protect you when it is your turn to speak?

“This is your warning. If you are going to knock on the desk and try to disrupt the honourable member for MICAL stand to your feet and waltz out of this House right now because it will not be allowed and consider yourself suspended. Period. I am not going to tolerate it. It is childish, it is embarrassing and you have no right.”

Long Island MP Loretta Butler-Turner had left the session just as Dr Major openly rebuked her colleagues. This reignited speculation that discord is prevalent within the FNM.

She later told The Tribune that despite her early departure, she supported the actions of her colleagues.

Mrs Butler-Turner said: “I did take part and I did hit the desk as my party did in protest of MICAL MP Gray speaking. I did walk out as he (Dr Major) was suspending, but I do stand with my party.

“I knew he would suspend after I saw him stand so I left after the banging of the desks was complete.”

Despite Dr Major’s stern warning, the remaining opposition members continued to bang on their desks as the MICAL MP again attempted to make his budget presentation. The session was then suspended for several minutes, with Dr Major ordering Dr Minnis, Mr Chipman and Mr Grant to leave the chamber.

Montagu MP Richard Lightbourn was also in the chamber, but was not named or suspended by Dr Major. However, he also left with his colleagues.

“V Alfred Gray has interfered with the judicial process and he should not still be allowed to operate as a Cabinet minister,” Dr Minnis later explained to this newspaper. “When a civil servant commits an offence, they are suspended or are placed on administrative leave. Why wasn’t the same done with him? We will not tolerate two sets of laws here.

“The FNM’s position is firm and we will remain resolute. Alfred Gray will not speak in this House.”

Asked why the opposition decided to stage its protest of Mr Gray during such a crucial debate as the budget, Dr Minnis responded: “All they (the government) had to do was fire him and not allow him to speak.”

When the session continued after the brief suspension – with Central and South Abaco MP Edison Key as the only opposition member present – Dr Major said the three MPs named were in violation of House protocol.

“They began to violate Rule 87.3. By the authority, the following members were suspended for the remainder of the sitting today (Monday): member for Central Grand Bahama, member for Killarney and the member for St Anne’s .

“I would also like to encourage members on the other side that despite the challenges and the increase in temperature as it relates to the matter, you are not to take matters into your own hands and feel it necessary to also repeat the events that transpired here today.”

Bains and Grants Town MP Dr Bernard Nottage, standing on a point of order, said the opposition was in contempt of the Speaker and guilty of disrupting Parliament.

Dr Nottage, who is also the leader of government business in the House, said because of the opposition’s actions there will be consequences.

“It cannot be that those members can merely waltz back into the chamber and expect us to make accommodations for them,” he said. “The budget debate has a prescribed time in which we would like it to be completed and there is a sequence that (there are) three government (speakers) to one opposition.

“If they choose to absent themselves from Parliament or to have themselves suspended after the Speaker has warned, that has consequences for the rest of this sitting,” Dr Nottage said.

The FNM is expected to return the House of Assembly at its next sitting.

On March 25, the FNM took the same action against Mr Gray when he tried to speak in Parliament. That same day, Mr Christie revealed that Mr Gray had been relieved of his post as minister of local government pending the police investigation. However, he remains minister of agriculture.

They are conducting themselves just as Papa's spoiled children are expected to do. there are so many important matters in the Bahamas that is in need of attention and the best they can do is be disruptive. it is to bad,

Shut up Birdie, when in opposition your PLP was just as bad. Birds of a feather. No political party in this country is a saint, should be proud, and has not harmed The Bahamas, NONE!!

The FNM Members should take into consideration that there are more Government members. would they feel it is all right for Government members to bang on desk, and make noise to stop them from speaking. their actions is just plain foolishness. and they are the first to say democracy is dead. Mr. Gray is an elected member of the house sent there by people to represent them .he has a right to speak. and the FNM's can not take that right away from them.

BIRRDY IF THE AG CAN LET MR GRAY GET AWAY WITH HIS CRIME. . .THEN THE PEOPLE HAVE A RIGHT TO TAKE MATTERS INTO THEIR OWN HANDS! democracy DEMANDS THAT WHEN THE GOVERNMENT HAS BECOME CORRUPT AND DESPOTIC. . .THE PEOPLE MUST GET RID OF THEM BY WHATEVER MEANS THEY CAN FIND!!

THE MOST PRESSING PROBLEM WE HAVE IN THIS COUNTRY AT THIS TIME IS THE PLP GOVERNMENT. . .A GOVERNMENT THAT HAS BECOME A NATIONAL CRISIS!!!

AND not only is he getting away with it - but they are punishing the Island Administrator who he contacted because he spoke out about it. He has been placed on suspension.

So be warned fellow citizens. If you see a PLP MP shoot somebody in cold blood and even have a photo with your phone - for God's sake don't tell anybody. You might find yourself brought before the Court and charged with the murder of that person.

But, as Bahamians, we've known that for many years.

Cooked is right, I'm told the mysterious PROJECTED(not actual) drop in the deficit is due to a really nifty accounting magic trick. Just move some categories around and voila! If only the government were being graded on marketing...

Wonder what the IMF will think of this ....

You are correct !!! It is a waste of time talking about the budget. We never get to see the actual WHAT WAS SPENT figures the following year after our dreamy budgets are passed.

ALSO why the Hell doesn't the FNM expel Edison from the Party? This is the 2nd time there has been a big to-do in the House in the last couple years and the last time he remained in the House as well.

Just some thoughts, because it does seem mysterious.

Ole Eddie is tolerated because at 80 years there is very little that they wish to do with him. The FNM members need to stay in the House and continue to represent their constituents and present their alternative views on government .............. do not give the PLP the satsifaction of speaking to themselves and show boating about their "achievements".

Edison's take on the situation is really quite a simple one: The people in my constituency elected me to represent them in parliament; I cannot properly represent them without attending parliamentary sessions; and, I am being paid to attend parliament so that I may properly represent my constituents. Why can't Minnis and his fellow show boaters behave with the decorum expected of honest principled individuals who take their political endeavours seriously. Wrongfully scorned children who allow themselves to be too easily thrown out of the sand box seldom have the opportunity to develop and grow up with a meaningful perspective on life. Minnis is clearly a man more comfortable outside of parliament than he is having to stand on his own two feet and think quickly inside the people's house of assembly.