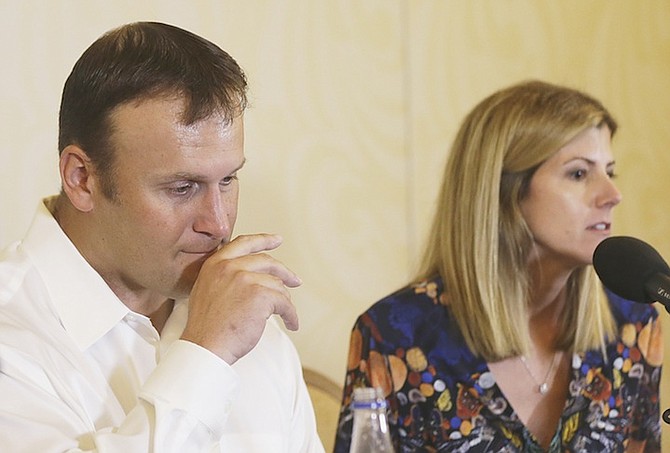 Former Miami Dolphins fullback Rob Konrad, left, with his wife Tammy during a news conference where he told of his ordeal after he fell off his boat nine miles from shore while fishing last week off the South Florida coast. Inset right, Konrad in 2001 scoring for the Miami Dolphins.

ROB Konrad walked wobbling into the room, requiring assistance to climb the podium so he could face the media to discuss his death-defying 16-hour swim to safety.

THE former Miami Dophins fullback sipped from a bottle of water, his efforts to rehydrate continuing four days after his ordeal. His wife, Tammy, sat at his side rubbing his leg in support, and tears welled in their eyes as he spoke in Plantation, Florida, on Monday.

Konrad, 38, had swum 27 miles to Palm Beach after being tipped out of his boat by a large wave while fishing. His escape was a testament to willpower and world-class athleticism. The first reports of his adventure last week received worldwide attention. “It’s an incredible story,” Diana Nyad, the endurance swimmer, said. “Taking his life in his hands and deciding he was going to save himself, I admire him.”

Konrad, who played for the Dolphins from 1999 to 2004, had been around boats since his childhood on Boston’s North Shore. So he knew what it meant when he fell out of his 31-foot boat while fishing alone nine miles from land.

“A boater’s nightmare,” he said, still weak after several days in hospital for treatment of hypothermia and dehydration. “It was a miracle he made it home,” his wife said.

Konrad said he was taking his boat for servicing last Wednesday and decided to do a little fishing along the way. He had caught a large fish and was tending to the rod when a large wave hit, flipping him into the ocean. His boat was on autopilot and headed east, eventually being found on Deadman’s Reef near Grand Bahama.

There were no other boats in sight. Konrad wasn’t wearing a life preserver. It was 12.30pm. “I realised I was in some real trouble,” he said.

Konrad decided to swim towards shore, although he reckoned the trip would take more than 10 hours, and feared succumbing to hypothermia or cramps after two or three hours. The ocean temperature was in the low 70s - far from frigid, but a lot colder than his body temperature.

So Konrad decided he had better keep moving. He took off his shirt and began alternating between a breaststroke and backstroke.

He said he is not much of a swimmer, but Nyad figures his football experience made a big difference. “We’re not really talking about a swimming story. We’re talking about a survival story,” Nyad said. “I’m sure his background as an athlete - toughness, having resolve, knowing things are going to be painful - were the saving grace for him.”

Konrad said he got bit “by a whole bunch of stuff”. A shark circled before it moved along. “There was a lot of stuff glowing at night, probably some jellyfish,” he said. He could also see lights along the coast and pick out landmarks. As he tired, he gained emotional strength.

Twice he was nearly rescued. A recreational fishing boat approached to within 50 yards, but Konrad couldn’t flag it down. Then a Coast Guard helicopter searching for him flew overhead. “They had their lights on me and kept going. They didn’t see me. That was a difficult time.”

But the ex-Dolphin kept swimming, thinking of his daughters, aged 8 and 10. “I was probably pretty delirious at the time, but I could see the lights getting closer and closer,” he said.

Then the sound of the ocean changed. He could hear waves hitting the shore, and finally he reached land as well.

“The problem was I couldn’t walk. My body was shaking uncontrollably. I crawled up on the beach and warmed myself up enough to be able to walk.” He rang the doorbell of an oceanfront home for help at 4.30am on Thursday. Paramedics were summoned, and soon he was en route to the hospital.