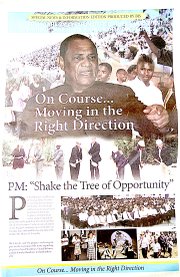 Dr Sands questioned the government’s focus on public relations at the expense of the taxpayer, adding that the outsourcing of printing conflicted with the administration’s mantra of “believing in Bahamians”.

However, BIS officials defended the 56-page full-colour special news and information “newspaper” released last week as a factual non-partisan account of the government’s work on behalf of the people during its second year in office.

The publication is the second in a series chronicling the government’s achievements, and was printed by an American company with a print run of 50,000 copies, according to Director General Luther Smith, who said the agency was acting on its legislative mandate.

Pointing out that governments in every country generated their own media content, Mr Smith charged that all news was a form of propaganda, and that the discerning factor is how the information is used.

He referred to the official external broadcast institution of the United States federal government, Voices of America.

“Even if it is factual,” Dr Sands said, “it still outlines a very pro-PLP agenda under the guise of being a report by the government of the Bahamas, who just happens to be PLP. This is an entirely partisan political publication and quite frankly the publication costs of this drivel – most of the publications have wound up in the garbage – ought to be sent directly to the chairman of the PLP.

“They should cease and desist from printing their own PLP propaganda with the people’s money,” Dr Sands added.

Mr Smith told The Tribune yesterday: “It printed about a week ago, it was not printed locally. We got quotes from local companies, including The Tribune and others, but in terms of economies of scale we got it printed in the United States of America. This is an ongoing attempt at putting another focus on the government’s activities, not just through private media but through the government’s lenses.

“It is basically a digest of what ministers, and their particular ministries have been doing over a period of time. We’re just passing information to the people, who have a right to know what its government is doing. It’s not something where we have advertisements, or other content, it’s basically the information.”

Mr Smith said: “All news is a form of propaganda for that purpose, including what you (Tribune) publish everyday. Propaganda is information, how you use it is the deciding factor, how it is interpreted. People are saying they want to know what the government is doing, not everybody buys a newspaper or watches the news, or listens to the radio. It’s simply getting information out, and it’s not different from what happens in every other country.”

Mr Smith said he could not confirm the production’s costs, but would provide the information at a later date.

Dr Sands said: “It really is unfortunate when you think about this, they’re spending all this money to apprise the people of the Progressive Liberal Party narrative. Generally, if you are doing such a good job your work would speak for itself, wouldn’t it?

The edition also provides a listing of legislation put before the House of Assembly this term, and the date when each bill was passed. Of the 91 bills listed, 12 items were said to be pending.

Mr Smith said the copies will be distributed to centralised locations, such as post offices, government buildings and banks.

The publication was produced by BIS’ Special Projects Unit, said to be made up of Elcott Coleby, deputy director, Earlin Williams, consultant, and Latonya Symonette, special assistant.

Yesterday, Mr Coleby challenged critics to identify any information that was inaccurate or misleading.

He pointed to criticisms of the first publication, which revealed employment figures that claimed the Christie administration had added nearly 7,000 jobs to the Bahamian work force in its two years in office.

While the figure conflicted with additional unemployment statistics printed in the back of the magazine, recent Labour Force statistics released by the Department of Statistics have confirmed the addition of more than 8,000 jobs.

Mr Coleby said: “We are merely communicating the work of the government on the behalf of the people, which the BIS is mandated to do under the 1974 Act. It’s consistent with the mandate, it’s not propaganda. It’s accurate information, and if people can identify information or data that is incorrect, we invite them to draw it to our attention. So far nobody has been able to identify any incorrect data.

He added: “You can’t call BIS propaganda, there is nothing to suggest that they are trying to deceive the Bahamian people.”

I don't know why the FNM are so worried, they seem to think anyone that is not a die hard FNM supporter is a dumb stupid animal, hence they shouldn't even be able to read the "magazine". Also anyone with eyes can see the PLP have been a disaster with public relations, they just don't know when to shut up - they don't have to answer every claim the FNM throws at them.

Well...let's rephrase that a bit...everyone who voted PLP is a dumb stupid animal...LOL...considering that the PLP won by MINORITY of the total votes....combined opposition, FNM & DNA were the MAJORITY vote. But that's besides the point. As it stands now, don't think in good conscience that I could vote for either of the 3 parties just now...

That is very tue...as a tri-party affair, no one won a clear majority...they were all 'minority votes'...pair any of the mix up and obviously you gain a majority.

On occasion I am sure I can be...LOL

Doctor Sands seems not to realize that the PLP is the government. they have to get their accomplishments out to the Public. They will not get their information out through the Bahamas Print media which is bias . they for the most part lean towards the FNM. The PLP can do no right and the FNM no matter how wrong they may be is always right. Those are the facts.

You obviously ain't one of those PLP folk...so you ain't gonna be gettin' one of those kool-aid papers dem trying to keep pulling the wool over the other idiots eyes.

'putting Bahamians first'....... what a crock of sh!t. goddamn hypocrites.

Plenty Bahamian companies could have done this job!! $35 or 70k, whatever! it's still alot of money that could have paid bahamian salaries and put food on someone's table or paid their friggin light bill. But NNNOOOO they want to send the money to the US.

'putting Bahamians first'........ they need their goddamn tongues cut out.

PLP een never been for Bahamians!
Just; 'how do i stay in power as long as possible and line my pocket - SLOP Style!'

Can somebody please tell me where I can get my copy. . .I want my damn tings. . .or I going down town ta da house for ma tings! Even though the paper was done by the two biggest azz poles with a pen (A&E). . .I still want to read it. . .everybody should read it and gee them their due when they tell the truth in "they" papers! i GUESS THEM SAY THAT THEY NEEDED TA GO TO THE STATES BECAUSE THE TRIBUNE AND GUARDIAN THEM WILL NOT TELL THE TRUTH ABOUT THEM!