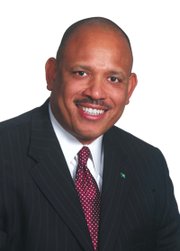 FREE National Movement insiders yesterday dismissed Dr Duane Sands as a failed candidate for government who lost to “an American that barely had status in the Bahamas.”

Their comments came in reaction to Dr Sands’ revelation on the Jeff Lloyd talk show on Wednesday that he is considering challenging FNM leader Dr Hubert Minnis for party leadership at its next convention.

Dr Sands said the FNM has not “gained traction that we ought to have,” particularly in view of the current government’s “missteps.”

But the FNM insiders – who wished to remain anonymous – noted that Dr Sands lost in both the Elizabeth constituency to current MP Ryan Pinder during the May 2012 general election and in the by-election of 2010, the only election races in which he has participated.

One source said: “We ought to have been winning that (by-election) seat by hundreds. How can you then put yourself up as leader when you lost after the government threw its entire set of resources around you?”

For his part, FNM leader Dr Hubert Minnis countered Dr Sands’ statements about the FNM not gaining traction with Bahamians by saying the FNM has had “very positive traction with the Bahamian people.”

He added that Bahamian party politics is democratic and so those who wish to challenge him for leadership of the FNM are free to do so.

Amid talks about former Prime Minister Hubert Ingraham considering a return to politics and Dr Sands’ own confession that he is considering running for party leader, FNM chairman Darron Cash knocked notions of tension about leadership in the FNM.

“I don’t see it as division,” he said. “I think as a vibrant political party that is well known for robust leadership and debate, in the period before we become government, the FNM is used to strong personalities seeking to break through the clutter.”

“Several days ago when asked about running no one had indicated any interest or indicated they were thinking about running. I am glad Dr Sands has stated his interest. In the future, members and leaders of the party will be looking forward to hearing his views in terms of what he can do differently from the current leader. That would be a meaningful conversation.”

“Anybody else who is interested in being party leader ought to come forward and say so,” said Mr Cash.

He added that he doesn’t “expect there to be quite a number of other people coming forward.”

As for Dr Sands’ criticism that the FNM has not gained traction with Bahamians, he said: “One would expect that anybody who projects himself as the future leader would have to differentiate him or herself form the present team by saying the present team is not up to standard or up to mark. We expect that kind of differentiation. But it’s still a function of an individual’s opinions.”

Sands is an idiot. Fell right into the PLP's hands with this nonsense.

Sands will never ever be PM, he is an arrogant man, and not very personable. Retire Dr. Sands, go back to being a doctor....

Christie is very personable. They describe Obama as "aloof" and professorial

Papa Hubert is up in Cooper's Town catch'in he small fishes and laughing. Good lord almighty tis true journalistic justice whens the Tribune has been publicly forced to discover the true red shirts leadership mutineer amongst them. To turn they mighty pens away from the PLP and be forced into reporting on themselves, cause upstairs over at Shirley & Deveaux Streets they is as red as they come in Bahamaland. For over six months this Comrade been calling out to deaf red ears how all is not well within and around the leadership of Comrades Minnis and Loretta. Let's see if the Tribune is go'in write more than just one brief story on the now exposed reds leadership's newest mutineer.

Politics is fun een it? I am making popcorn and going to sit back and watch da drama. Is Papa coming back? Will Perry get the push? What will Fweddie do? Will Pinder grow a pair and speak out against the idiots in the party? Will Papa and Loretta be united again? Will Minnis get the push?

It's all fun and games until someone gets hurt.

And it is the poor Bahamaland that is getting hurt.

Me -- I think Minnis is the best hope, but he needs to grow a pair as well. He also needs to start swinging a cutlass.

I am excited about Dr Sands’ announcement; He is the Doctor that the FNM ordered. With the help of Hubert Ingraham and Brent Symonette (Both of whom I advised are supporting him) he will be our nation’s next PM. Carl and them can Deride as much as they like. - The train has left the station!

Comrades Duane, Nottage and Rollins are shining examples why the smartest Bahamalander's makes the worst potential leadership candidates. Even if they can get elected to the House of Assembly, provided a PM backs them, but once they is tossed from the PM's womb going any further in politics will always remain unclimbable challenges. Bran's failure gotta be credited to some'tin or another of him being a doctor too? Maybe a doctor of voodoo for all we knows, cause of late with he flogging objectives he sure be sounding not from this Bahamaland world of ours. You ever before heard of political leader running on platform to flog Bahamalander's, all in full focus of the tourists cameras in Rawson Square? Good Lord what manner of a political leader is this man.

Geez, you are prescient. Bran is no doctor but his puppeteer is the eye doctor John Rodgers from Harbour Bay is. Said doctor fancies himself as a businessman and economist, but he has failed at every single business he tried from having a can't-lose pizza franchise, to a failed online news source, to being kicked out of his debit card scheme, to real estate and whatever. Said eye doctor recently spoke at a Nassau Institute function and it was all unintelligible pablum.

Rodgers hasn't had an original idea ever, but embraces every new idea that he reads about and starts promoting it. Did you see him at Bran's speeches during the election? He was like a nervous papa who's son was on stage at the school play. In Bran's case it is the blind leading the blind and the eye-doctor pun was intended.

The real question is not which person in the FNM might be better than the current leader but who is the better leader for the country between Minnis and Christie? Based on what we have seen of Christie over the past 20 months, the answer is obvious. He is so far removed from the reality of the abysmal state of the country that the FNM leader presents a clear alternative. Those in his party who cannot accept that their task should be to concentrate on regaining the Government and not fighting for leadership should take the honourable next step and leave the party.

Truer words have never been spoken

Comrade Sheeprunner2 readers will notes you could very well have wraps it all up by writ'in down your inner conflicts and I guess tis better and of course much cheaper come here on these hereto pages than pay a visit some psychiatrist. Good for the Tribune for allowing you to unload.

Point a finger at someone and three are pointing back. Same goes for you Tal. Good for the Tribune though, otherwise your opinion would not be heard either.

Comrade Banker tis me willing to deal with the so many insensitive and cruel accusations flying around on these hereto Tribune blog pages and you ain't exactly guilty of such sin. Oh yes, even Tribune readers need to hear the voice of reason that favors no politician or political party.

Sands certainly has to work on making himself more electable but he must be a serious contender for party leader. I think it would be good for the country if Papa stays in retirement. Bahamas can I'll afford another period of Ingraham and Christie dominated politics. They have had their time and a fresh approach to this country's many problems is needed. Sands speaks with a refreshing level of maturity and comes across as more rational than Bran McCartney. Time will tell but one thing is certain, the country needs an alternative to Perry Christie and the train wreck that is the PLP.