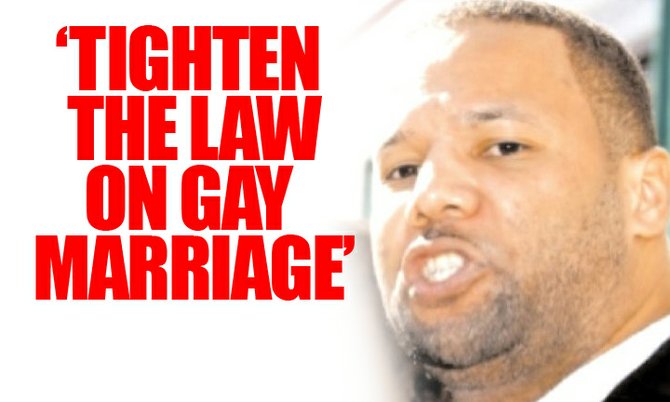 FORT Charlotte MP Dr Andre Rollins has called on the Christie administration to reconsider its plans to give foreign spouses of Bahamian women constitutional rights to citizenship and to clear up “apprehension” that eliminating sex as a basis for discrimination in the Constitution could one day lead to same-sex marriage.

He urged the government to provide clarity on the issues and a more detailed education process than that which occurred before the failed gambling referendum, to ensure that the matter is not politicised and to restore voter confidence in the Christie administration.

Dr Rollins’ concerns were outlined in a statement released on Saturday. When asked by The Tribune if this means he will not support the bills in Parliament if they remain unchanged, Dr Rollins said he awaits word from Prime Minister Perry Christie and Leader of Government Business Dr Bernard Nottage on whether they intend to consider his suggestions and make any amendments.

“I will be guided by their responses,” Dr Rollins added.

Dr Rollins said concerns over bill four as it relates to same-sex marriage needs to be addressed, otherwise the proposal will be mired in “a torrent of speculation and opposition” that could derail the referendum.

The fourth bill seeks to end discrimination based on sex. This involves the insertion of the word “sex” in Article 26 of the Constitution to make it unconstitutional to discriminate based on whether someone is male or female.

Dr Rollins said: “The question that will be in the minds of many Bahamians who consider question four is are they being asked simply to protect against discrimination of women, as has been postulated by those framing the discussion, or is this question asking them to give future legislators and judges the latitude and discretion to redefine marriage?

“If so, how wedded will they be – future legislators and judges – to the belief that marriage is the union between one man and one woman and are Bahamians today prepared to leave that up to their interpretation and discretion?”

To counter apprehension about this, Dr Rollins suggested amending bill four to give voters the option of defining marriage in the Constitution “as being between one man and one woman”.

The second constitutional amendment bill would allow a Bahamian woman who marries a foreign man to secure for him the same access to Bahamian citizenship that a Bahamian man has always enjoyed under the Constitution in relation to his foreign wife.

However, Dr Rollins said in light of the country’s “inability” to control illegal immigration, this proposed change should be reconsidered to protect Bahamian citizenship from exploitation.

“If we, therefore, accept the premise that we have an illegal migration problem and that economic considerations are paramount in the minds of those seeking refuge here, we should not compound our immigration challenges via constitutional provisions that give an automatic entitlement to citizenship upon marriage. Obtaining citizenship should be earned via a gradual process, not an automatic entitlement. Legal statute that gives the right to permanent residency or the right to work, as is currently the law, is preferable.”

He argued that instead of framing the proposed change as a matter of gender equality, the real question to be asked is whether any Bahamian, man or woman, should be able to give automatic entitlement to citizenship to a foreign spouse.

Dr Rollins also stressed the importance of the government getting the bills, the referendum questions and the educational process right.

“To succeed in this exercise, there should be absolute clarity, so that there are no opportunities for it to become controversial or political and to restore some of the confidence that has been lost following the last referendum,” he said. “The electorate deserves a more informed debate and educational process than occurred in the gaming referendum. Failure to respect the sensibilities of this more discerning and astute electorate will have ramifications which go far beyond matters of gender and citizenship.”

PLP MPs Leslie Miller and Greg Moss have also noted their reservations about some of the bills.

Last week the Prime Minister told reporters he assumed his party had the requisite votes for the bills to pass through the House of Assembly. The government needs about 29 votes, or three quarters of the votes in Parliament to call for a referendum.

The first bill would enable a child born outside the Bahamas to a Bahamian woman to have automatic Bahamian citizenship at birth. The third bill seeks to remedy the one area of the Bahamas’ Constitution that discriminates against men based on gender. The bill would give an unwed Bahamian father the same right to pass citizenship to his child that a Bahamian woman has always had under the Constitution in relation to a child born to her out of wedlock.

Debate on the bills is expected to resume on Wednesday.

Mr. Rollins, I love you! Evertthing I was thinking in a nutshell!!

we should give away passports to increase our genetic pool. We are all dumbed down already.

How about the government get out of marriage. Marriage should be handled between people, their family, and their religion. Stop issuing marriage certificates and that would solve the whole problem. Unless someone is being abused mind your business.

be very very careful, yinna know dey is a few skellingtons in ya closet and I do mean "CLOSET"

Here is what is happening - and it seems carefully orchestrated - PM's lap dog says "No referendum unless all are on board", and now you hear PLP insiders (Miller, Rollins) and PLP outsiders (Moss) to come up with noise. I bet my grandmother that the referendum will be called off. Deja vu, old angry men in the government (even the young ones), they don't want a modern, educated society in the Bahamas, bcz they would never ever get elected again.

oh, I just see at the The Guardian, that MP Wells dares to stick his head out of his hole as well and bark again. I wonder whether he draws the ire of the Boss this time. If not, then its a plot.

Sheeprunner, its a business contract supported by the state. Gay people Sheeprunner supports gay marriage because the seperation of church & state does not allow us to use religious grounds to deny them otherwise it would be discrimination. Its not my business when lawful adults marry other lawful adult. Other than abuse & respect for the law, your marriage to legal adults or your religion in a free society is your business. I think gay people are nuts to want in look @ the state of marriage in this country & our neighbor the U.S.

State of marriage in the Bahamas: Married men cheating and have kids on the side with sweet heart, or 2 separate households to support. Married woman sleeping around with pastor or young men in the community.. This is epidemic in our culture so gay marriage is the least of our problems. Our men cannot turn down a piece of side for nothing..

As a Churchgoer I say "Amen". They guys standing up their preaching and their wives and sweathearts herding the kids in the benches.

The state of Bahamian marriage is no different from any other post slavery West Indian society ...... from US South to Brazil. We have deep seated dysfunctions that have festered for the past 300 years. 70% of children born out of wedlock tells it all .................. low rates of 2 parent homes and matriarchal-dominated homes. Compare the "white Bahamian" family culture to the black Bahamian family culture......... check Fox Hill

The very significant concerns expressed here by Dr. Rollins are shared by many many like minded "over-the-hill" Bahamians, both men and women voters alike, who undoubtedly are sufficient in their numbers to swing the referendum vote as currently proposed from yea to nay.

What an idiot. Same sex marriage is the least of the worries of this sinking ship called The Bahamas. Why anyone would want to get married in this archaic society - gay or straight - is beyond me. Watch how the mindless Bahamians are swept up in this complete NONISSUE, forgetting the real issues at hand...like...oh...let me see...CRIME?! Focus people!!! Stop worrying about something that WILL NOT AFFECT YOU whether it happens or not. What's the worst that can happen from gay marriage? Absolutely nothing. Now compare that to what can happen if you get caught in the cross-hairs of a stray bullet. Absolutely everything. Don't be sidetracked.

CommonSense u nailed it. Our country is in a terrible state & people are so ignorant that they allow politicians like Rollins to distract them from important issues like crime. Or how about him showing the same passion for the passage of the Freedom of Information Act & it becoming law to help reduce corruption. Its easy to pick on gay people in the Bahamas it feeds the ignorance of the masses especially all the sinners sitting up in church. I can say this with great confidence that i've never walked around Nassau in fear of some gay or trans gender person robbing or killing me. But i'm certainly concerned about a bunch of scripture quoting thugs, murderers & adulterers.

Remember people who make the loudest noise against something are usually always distracting away from themselves because they are trying to cover up the very same thing they are detesting.

Correction: Nassau is in a terrible state. Until yall realize that the real Bahamas is not located on that little dirty rock (New Providence)........ nothing will change. My life is very good in the real Bahamas........... LOL