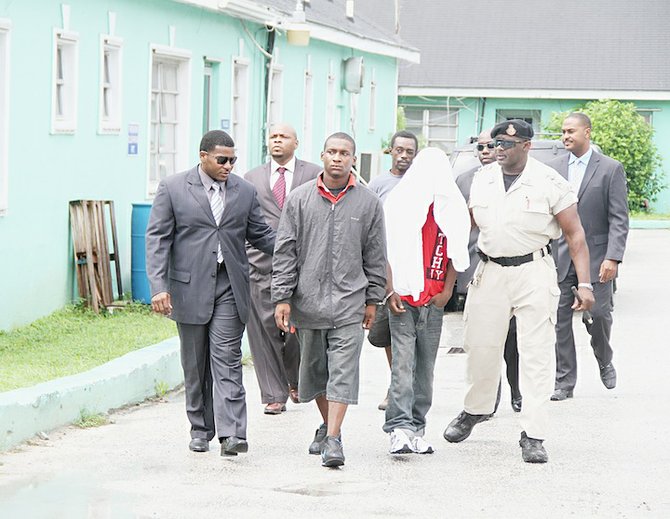 22-year-old Veron Hart (black jacket) and a 17-year-old were charged with the September 3 murder of Ned Joseph. At the back in the black shirt is 41-year-old Charles Williams, of Labour Street, who was charged in connection with the August 24th murder of Diontroy Moxey.

TWO of three suspects arraigned in connection with two recent murders complained to a magistrate they had received death threats from prison inmates.

“From whom did the death threats come?” the magistrate asked.

“He would prefer not to call their name in public,” Mr Cargill said.

“From prison?” the ACM asked.

The attorney said yes, adding that the threats were coming from the west section of maximum security at Her Majesty’s Prison.

The magistrate made a note of the complaint before advising the attorney to speak with police on his client’s behalf.

Hart and a 17-year-old boy face a charge of murder, alleged to have been committed on September 3.

It was claimed that they intentionally and unlawfully caused the death of Ned Joseph.

On September 3, Joseph was standing in front of his residence on Brougham Street West shortly before 5pm, when three men in a black Honda Accord approached him and shot him about the body before speeding off.

Joseph died in hospital the next day.

Both accused, represented by Mr Cargill, were not required to enter a plea to the charge and were told that their case would be fast-tracked to the Supreme Court on December 11.

In the next arraignment, Charles Williams, 41, of Labour Street was charged with the August 24 shooting murder of Diontroy Moxey of Flint Street.

Moxey, 18, was found dead with a gunshot wound near a park on Flint Street.

Williams was not required to enter a plea to the charge and his case will be forwarded to the higher court on December 11.

Before being remanded to Fox Hill prison, Williams claimed that on Saturday, while in custody at Nassau Street police station, he was assaulted by purported family of the deceased and was also told he would be “dealt with by inmates at maximum west.”

Ferguson-Pratt asked if he filed an official complaint with the police.

The accused said he complained to the police but did not file a complaint.

“I do not wish to be placed in the ‘west’” Williams pleaded.

“How do you know where they are?” the magistrate asked.

“The fellas, they tell me the fellas waiting for me,” he said.

While making a note for the Superintendent of the prison, the AC said “this is a matter that ought to be ventilated to the police department.”

Williams, like Hart and “20 inches”, was remanded to prison until the trial’s completion.