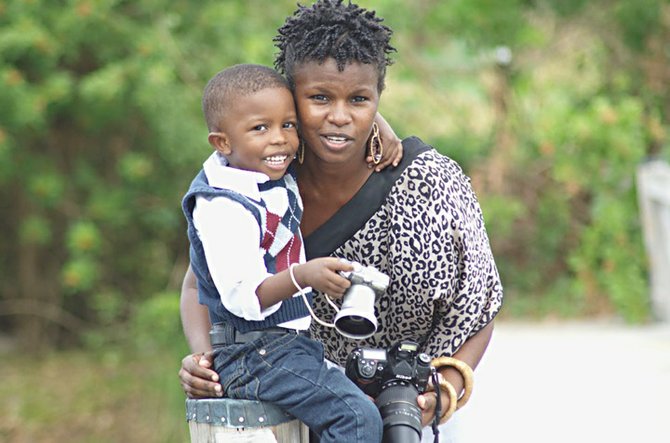 AT JUST four years old, young photographer Joshua Marshall has captured more emotion and creativity in his photography than one would imagine.

His inspiration goes way back to the day he was born. The story of Joshua Marshall is that of single mother whose baby boy battled a health condition that threatened to compromise his quality life and prevent his artistic gifts from shining through.

Being a professional photographer, Candis said she introduced Joshua to photography as a child, because he always wanted to use her camera.

“When I gave him the camera the first time, I told him to take a picture of something that he was interested in. This is at two years old, after he had his last seizure. We made a total 360 turn. He started taking pictures of things that he found interesting and he started drawing into his own world,” she said.

Candis and Joshua’s work were featured at Hillside House Gallery in an exhibition themed,

“Dying to be beautiful: A conversation between a mother and son, through photography, brought on by his near death experience.”

Candis told Tribune Entertainment, the purpose of the exhibition was to shed light on the “Joshua Art Initiative,” which is a project to develop a forum for people in the field of education, culture and social development to devise collective strategies through the arts to transform the way the nation’s youth are being educated. In doing this, Candis said she hopes to implement those strategies in an effort to raise competency levels within the school system and work force.

She said the Joshua Art Initiative focuses on making the nation victorious, by giving children hope, one child at a time.

Speaking about Joshua’s early life, Candis said she can recall the moments clearly, going through difficulties with her pregnancy. Just a few weeks after her son was born, he was admitted to the hospital with pneumonia.

“When he was one, he started having seizures. When they started, he was having them everyday. I went to the doctor, I told him Joshua is having seizures and I don’t know what to do. We spent the first week in accident and emergency and most of the time we spent in there, dealing with doctors, he was complaining about headaches,” said Candis.

Doctors said it was strange for an eighteen month old to be telling his mom that he had headaches.

“I am a single parent, so it was quite challenging. He was referred to a neurologist to run test. For each test, they found no solid reason as to why he was having the seizures,” she said.

She said she suggested to Joshua’s doctor, he might be having seizures because of the drastic change in his diet. “The doctor said that couldn’t possibly be it, but they couldn’t tell me what was causing it,” she said.

“Eventually they recommended that I put him on medication as a part of his treatment. After starting his medication, it changed him. The medication kinda sucked the life out of him,” said Candis.

After a few months, Candis said she realised that she didn’t have the same child anymore, as he was still having the seizures. Candis did not give up, she said she told the doctor, something else had to be done.

“ I decided that I would modify his diet and I took out the processed foods and I introduced more raw foods to his diet. I did my own research and I found out about the type of seizures he was having. After a while, he moved from having seizures all the time, to only having one. By the time he was two, he had one major seizure and that was it for me. I didn’t know what else to do. I came to the point where I told the doctor that I wanted him off the medication,” said Candis.

From that moment until now, Candis said Joshua has not had a seizure. Candis said she is not a doctor, and she does not claim to be, but as a parent she said you have to be aware of everything when your child is sick.

“I just based my assessment on my interaction with my son and using it as a guideline on what needed to happen in his case. I am not saying the doctor was wrong, but I’m saying as a parent, you must not just rely on the doctor’s insight into what is going on in a medical situation, as it relates to your children. You must be active with the doctor, assessing as they assess,” said Candis.

Inspiring her in more ways than one, Candis said: “This is a child who couldn’t walk in a straight line to save his life, when he was sick. Now you can tell him to do this and do that and he can do it effortlessly.”

She said it was never about Joshua being a normal child, it was about him being who he was created to be. Candis said using the camera forced Joshua to develop his fine motor skills. From adjusting certain settings on the camera to taking off the lenses and putting them back on. All of these things became a part of Joshua’s rehabilitation process, she said.

“I found out that he really had an insight into what he was doing because for every photo he took, he had a whole story. One of his most popular pictures is a photo called Spiderman,” she said.

Joshua wanted to be Spiderman; not the character, but the boy behind the mask, Peter Parker.

“He thinks Spiderman is cool, but he wants to be Peter Parker because Peter is just like him. He was bitten by a radioactive spider that could’ve killed him, but didn’t kill him, it made him stronger. Joshua had seizures that could’ve killed him, but it made him stronger. Peter was a photographer; Joshua is a photographer. Peter is smart; Joshua is smart. Peter was strong, and Joshua is working on being strong. Not putting on a mask to become Spiderman, but being the best version of himself,” said Candis.

For all of the things he had to face at a young age, Candis said Joshua looks at those characters and he says “that’s me.”