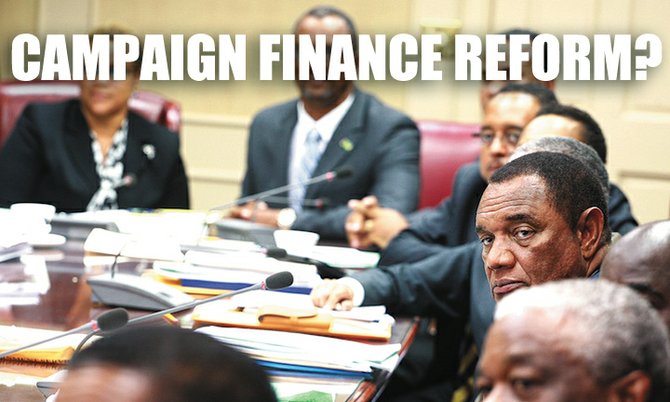 Drawing on recommendations outlined in international observer reports on the country’s electoral process, Mr Christie hit out at the deterioration of ethical political practices at a parliamentary conclave yesterday.

“We are challenged to determine the extent to which foreign investors should be contributing to our democracy directly in campaign finance matters and we have to determine whether we are prepared to regulate that by way of disclosure even if its to an electoral commission and not to the public,” he said.

“We are living a lie to just continue to allow this current system that we’re operating under to exist,” Mr Christie said, “because you know and I know, and everyone else knows that a lot of things are happening, where you’re taking advantage of all sorts of opportunities if you’re the government and it places people at a significant disadvantage and that’s not how a democracy functions.’

CARICOM and the Organisation of American States (OAS) were invited by the former administration to observe the 2012 general elections, and both agency’s reports pointed to campaign financing as an issue affecting the pre-electoral period.

The CARICOM report also called for the establishment of an independent boundaries commission, a code of conduct and the use of smaller voting booths, while the OAS report also cited gaps in the participation of women, the voter registry and media access.

Mr Christie said fellow parliamentarians were aware of the “irregular” proceedings that have been consistent in the country over the past 15 years; however, he did not confirm or deny whether his party was culpable of similar actions during this year’s electoral process.

“There are laws now that say you shouldn’t treat, meaning you shouldn’t do things to induce people to vote for you in an election, and very clearly you can just list countless examples where the law is breached,” Mr Christie said.

“It’s almost like when I’m in power I do it and when you’re in power you do it.”

“For me campaign finance reform has now been put on the table by the international observers, there’s going to be a significant amount of public opinion developing on this issue.”

Despite his personal convictions, Mr Christie said he will not impose reform on the country but will instead agitate for legislative change.

He added that parliamentarians must dedicate themselves to promulgating a “new culture” for Bahamian politics.

PM Christie you the man with the House majority so there's no need to be doing all this Yakety Yak. Bring a Bill to the House and "pass" it.

I supported you but I really need to know if the numbers man's handed over money to the PLP directly, or indirectly through your 2012 candidates? For this you done have all the answers about the numbers man's money and me and lots more want to know how much and who got the cash?

Right now your government's proposed referendum seems to be too tainted to take before the natives.

Time to confront criminal election behavior, yeah right! Who is Mr. Christie talking to in cabinet, the persons who funded his party 2012 election?

Christie only said this because the report came back and he didn't want us to say that he didn't respond and take action.

In the mind of his supporters - he did take action - he spoke about it.

So he has acted on it.

We will never hear anything else on the matter,

How effing DUMB do you think we are?

what the hell ,all these jokers do is talk in parliment ,now they have to have a conclave to talk about parliment ,even with a theme.. lol, watched the news on plp tv tonight ,zns. why even waste money w/ reporters ,just give 15 mins of PGC talking and looking thougthful and caring and 15 mins of U/R with either M Pratt or Supt Dean waxing not too poetic about its merits ,,i swear this joker never stops talking ,,,